What can horned beetles tell us about the mechanisms of plasticity and their evolution?

We also interviewed Dr. Casasa to learn more about her work and the unique challenges that come with the empirical study of plasticity. Find out what she’ll be working on next at the end of the post!

What can horned beetles tell us about the mechanisms of plasticity and their evolution?

How do organisms interact with their environments? Research on phenotypic plasticity focuses on how organisms with the same genotype can adjust their phenotypes in response to different environmental conditions. Plasticity can take many forms and can occur at any stage during development, but those changes that occur early in development are commonly irreversible and it is those changes that fall under the rubric of developmental plasticity.

An extreme case of developmental plasticity are polyphenisms, where instead of showing a gradual response to a particular environmental factor, individuals develop into distinctly different, alternative phenotypes. One of the most well-known examples of polyphenism are castes in social insects (bees, ants, etc.), in which nutritional conditions determine whether females with the same genotype develop into workers or queens, with no intermediates.

Yet, what are the mechanisms that specify development of one or the other phenotype? And, how does plasticity itself evolve? Are the genetic mechanisms underlying plasticity responsible for the different degrees of plasticity seen across species?

I have been tackling these questions for the past several years. Our recently published article in Nature Ecology and Evolution was the last chapter of my PhD dissertation, and tried to answer some of these questions from a comparative transcriptomic approach. My advisor, Armin Moczek, and I decided to collaborate with Eduardo Zattara, a former postdoc in the lab who has ample experience in analyzing transcriptomes. Despite having returned to Argentina, Eduardo was the perfect mentor to remotely guide me through all the bioinformatic tools needed for this project.

To address our questions, we focused on horned dung beetles from the tribe Onthophagini. In these beetles, the quality and quantity of nutrition received during larval development dictates whether males develop as large individuals with large horns or as small individuals with no horns. Large horns are used in male-male combat to gain access to females, while hornless males rely on more sneaky tactics to circumvent large males and intercept females. Importantly, like the castes of social insects horned and hornless males, too, constitute a polyphenism with very few intermediates seen in nature.

The wide diversity of horns and plastic responses found among Onthophagini allowed us to explore the mechanisms and evolution of plasticity. We focused on three species of horned beetles that show vast differences in the degree of plasticity: Onthophagus taurus, which exhibits an extreme, explosive response to nutrition; closely related Onthophagus sagittarius, which has secondarily lost horns; and distantly related Digitonthophagus gazella, which displays a modest plastic response, similar to what it is thought to be the ancestral condition for the tribe.

To collect tissues for transcriptomic analyses the first step is to get adult beetles from the field to start beetle colonies. Beetles are collected in organic cattle farms by our collaborators in North Carolina (O. taurus) and Hawaii (O. sagittarius and D. gazella), and then shipped to Bloomington, Indiana, where we keep them in separate colonies of ~300 beetles. Females build dung balls and lay a single egg in each ball. We collect the balls and open them to move the recently hatched larvae to be artificially reared in 12-well plates. This set up allowed us to manipulate nutrition levels by supplying dung of varying quality and pick either large, horned or small, hornless individuals of each species that were later used to dissect horn tissue and perform RNA extractions and sequencing. 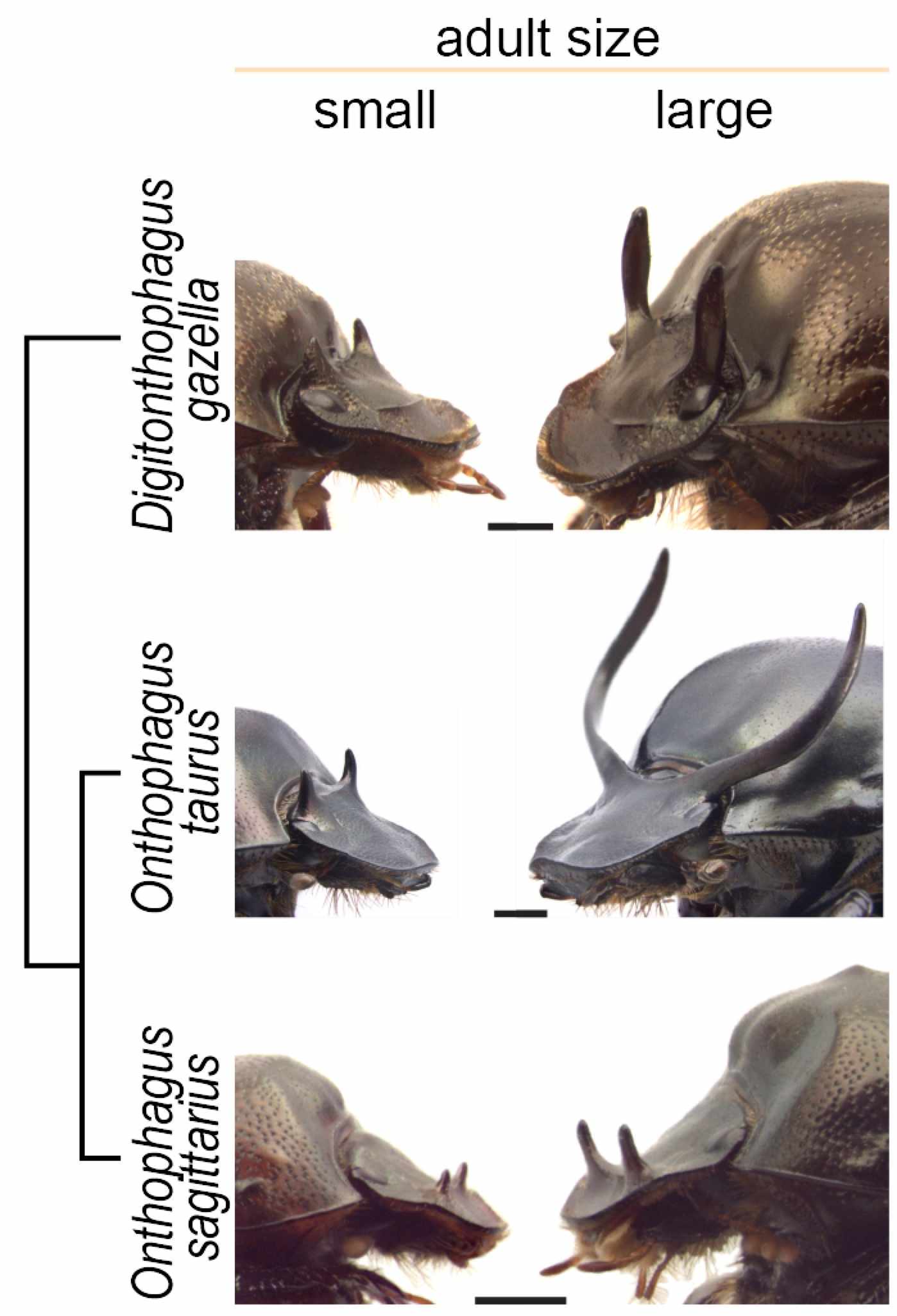 We were particularly interested in understanding the relationship between gene expression changes across nutrition conditions and what we saw at the morphological level (horned vs hornless). Are differences in gene expression between small and large individuals greater in the species showing the more dramatic morphological response? How about the species that has lost the plastic response? Using RNAseq to estimate genome-wide expression in horn tissues, we found that gene expression differences mirrored what we saw at the morphological level; more exaggerated polyphenisms correspond with an increased number of nutrition-responsive genes. While this may seem intuitive, there was no previous evidence or expectation that this would be the case (e.g. we could have seen the same number of genes but more growth promoters vs. inhibitors in extreme responses).

Finally, we explored several additional questions that remain heavily debated in the field. For example, genetic accommodation is a process proposed to explain how variation in plastic responses among individuals can fuel evolutionary diversification of plasticity among species. Our data is consistent with such a scenario: ancestral plasticity in gene expression may have contributed to the evolution of growth exaggeration as well as loss in the Onthophagini tribe. Similarly, whether the evolution of novel degrees of plasticity is made possible by new genes (so called taxon-restricted genes) or facilitated by already existing, conserved, and re-purposed genes was unknown. We found evidence that a combination of both contributed to the exaggeration and loss of plasticity. As such our work advances our understanding of the evolution of developmental plasticity, a fundamental feature of most forms of life on our planet.

This blog post has been reproduced with permission from the Nature Research Ecology & Evolution Community.

Read the original paper here: What can horned beetles tell us about the mechanisms of plasticity and their evolution?

Dr. Casasa, can you talk to us a bit about your research trajectory and how you came to settle on plasticity (and its evolution) as the main driving question behind your work?

I received my undergraduate degree from the UNAM (Mexico City), where I worked in a cell biology lab that focused on describing programmed cell death in rat ovary development. It was then that I started to become interested in development at the organismal rather than cellular level. In particular, I was fascinated by the role of the environment during development. For my PhD, the lab of Armin Moczek at Indiana University was the perfect place to start exploring multiple aspects of developmental plasticity. There, I was able to study the mechanisms of developmental plasticity and their evolution, as well as the role of plasticity in evolution.

What is particularly challenging about designing experimental systems to study plasticity?

One of the main challenges of studying developmental plasticity is that organisms that display the most diverse developmentally plastic phenotypes are typically emerging model systems. This poses multiple challenges that range from animal husbandry to molecular tools available. In our study, for example, we only had one of the species’ genomes available. This is more than many other emerging model systems have, but still posed challenges during our analyses.

This paper was based on the last chapter of your dissertation and we read it with great excitement!

I was very excited to have it come out too! It is great to hear that others are excited about my work.

What kinds of questions will your work open up for future study?

Additionally, we found that the evolution of novel degrees of plasticity was possible by a combination of taxon-restricted and conserved genes. An area of future research that I am particularly interested in is knowing how conserved, pre-existing gene regulatory networks are coopted into the evolution of novel plastic traits. For example, are some gene regulatory networks predisposed to be recruited into the evolution of plastic traits over other networks? And, how are taxon-restricted genes integrated in the network into a fully functional plastic response?

What will you be working on next? Are dung beetles still in the picture or can we expect more interesting models to analyze the mechanisms and evolution of plasticity?

I am currently a postdoc in the Ragsdale lab at Indiana University. I am using the lab’s model system, the polyphenic nematode Pristionchus pacificus, to better understand the mechanisms and evolution of plasticity. More specifically, my work seeks to understand the origin and evolutionary history of polyphenism genes across the nematode family (Diplogastridae), in which the polyphenism arose. By using genomics and transcriptomics I am investigating how genes in rapidly evolving gene families are integrated into ancestrally plastic networks. More on this to come out soon!