Menu
Emperor penguins are the only vertebrate species able to breed during the Antarctic winter. They huddle together to try to keep warm in an icy landscape that can be as cold as 50 degrees Celsius below zero. But how warm is it inside the huddle?
worm-1140767_960_720
Previous
Next
Empty accordion
Niche construction in ecology

What is a niche?

In recent years, an organism’s ecological niche has been characterized as an n-dimensional hypervolume of conditions, resources, and impacts.  A key feature of modern niche concepts is that the ecological niche is relativistic, part defined by the organism at its centre. This is because organisms specify which environmental factors are significant components of their world, a perspective very much in line with niche construction theory.

Organisms actively modify their niches, and those of other organisms, through their activities and choices. However, niches have typically been construed as static rather than evolving. In order to devise a more dynamic niche concept, Odling-Smee et al (2003) characterize an evolutionary niche as ‘the sum of all the natural selection pressures to which the population is exposed‘.

How does niche construction relate to ecosystem engineering?

Niche construction theory explores two interacting processes. The first is the modification of niches by the environment-altering and -selecting activities of organisms. The second is the subsequent evolution of one or more populations in response to selection altered by the first process. The environment-altering aspect of niche construction is broadly similar to the concept of ecosystem engineering in ecology (Jones et al 1994, 1997).

How do organisms modify niches?

Organisms change their niches, by physically perturbing them, or by relocating in them, thereby exposing themselves to new conditions. They may create novel niches by inceptive niche construction, by innovating. For example, the evolution of improved paper technology in Polistinae wasps apparently had massive effects on the geographic distribution, colony size and social complexity of these wasps (Hansell, 1993). Organisms can also buffer out some of the changes in their environments that are caused by other agents by counteractive niche construction. For instance, wasps regulate temperature in their nests by bringing droplets of water to cool the nest, or by stretching and contracting their abdomens in unison to warm the nest.

Niche Construction Theory is explicit about the need to treat niche construction as both a developmental process and a cause of evolution (6). Likewise, many development-minded evolutionists have argued that developmental processes constitute significant but neglected evolutionary mechanisms in their own right (9,10). For instance, micro- and macro-evolutionary patterns are viewed as shaped by developmental biases and constraints (9/ cite also Uller et al. 2018), while developmental plasticity is perceived to provide phenotypic variants that can be later stabilized by genetic networks. ‘Genes are followers, not leaders’ (10/ Gilbert 2015 nat rev genetc., Moczek et al 2011 review, Levis and Pfennig 2016, David W.Pfennig et al. 2010, Pfennig in Moczek special issue).

In addition to directing, regulating and constraining the action of selection, niche construction is a source of evolutionary innovation (3,6). The niche construction perspective stresses that developmental processes are not predictable from the properties of genes, nor well-described as an unfolding of a genetic program (1,11-13). The variation needed for evolutionary innovations and novelty need not rise through mutation (6, 14-16).

For example, various aspects of the phenotypic form of dung beetles hang critically on the niche construction of larvae and their mothers who process the brood ball to modify the microbiome (Swchab et al. 2015/2016 paper). Mammalian gut immune systems and tissues are induced by colonizing microbiome (citation and revise).

Recent years have witnessed the accumulation of empirical support for extra-genetic inheritance through multiple routes (Russell Bonduriansky and Troy Day book), including epigenetic, ecological, behavioral, and cultural inheritance systems and also through the transmission of the microbiome (17,18).

Bacteria are an essential component of the inheritance system in many insects and vertebrates. For instance, Dedeine et al (19) found that females of the wasp Asobara tabida cannot make their oocytes without products being made from the Wolbachia bacteria stored in them: A. tabida treated with antibiotics were unable to produce mature eggs. Similarly, mammalian development is not complete without signals from symbiotic bacteria (20,21).

The incorporation of ecological inheritance into evolutionary biology has consequences for development. In each generation, offspring inherit a local selective environment that has, to an extent, previously been modified, or chosen, by its niche-constructing ancestors. The resulting dual inheritance implies that each offspring must actually inherit an initial organism–environment relationship. In standard evolutionary theory, the development of organisms begins with the inheritance of a ‘start-up kit’ of genes: in niche-construction theory, it begins with the inheritance of a ‘start-up niche’.

Minimally, each start-up niche must include a specific location, in both space and time, typically influenced by parental actions and choices. In many species, parents ensure that some kind of resource package is also present. For example, phytophagous insects typically choose to lay eggs on specific host plants, which subsequently serve as resources for their offspring.

In birds and insects, where the egg is the ‘start-up niche’, yolk is provided for embryonic and larval nutrition. Moreover many organisms provide protective chemicals in their start-up kit. These can include antibodies such that the young can survive before their immune systems mature (birds, mammals), compounds that are poisonous or distasteful to predators (moths) (22), or even sun-blocks that protect transparent embryos and larvae from the effects of solar radiation (23).

From the niche construction perspective, the key task for any developing organism becomes the active regulation of its inherited ‘niche’, by responding to its environment, and by altering its environment, in ways that keep its personal organism–environment relationship continuously adaptive, for the rest of its life. ‘Unfolding genetic programs’ are rarely acknowledged as affecting developmental environments. However ”niche regulation’ involves niche construction that partly destroys the independence of developmental environments from developing organisms. That permits developmental processes to influence evolutionary processes.

In summary, NCT offers the prospect of a richer evolutionary synthesis with development, a synthesis that is consistent with the full gamut of Evo Devo mechanisms, and that does not compromise its conceptual tools (3).

Niche construction in the human sciences 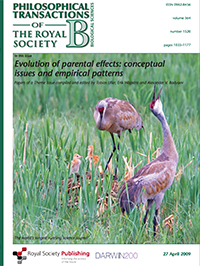 This is the remainder of the page

This is the remainder of the page

all of Ellis’s papers

NC and diversification Brathen and Ravolainen NC by growth forms

In addition to trophic interactions, organisms also produce, modify, and destroy habitat and resources for other living creatures. In the process, they drive co-evolutionary dynamics and transform the abiota into new states.

This insight has important implications for understanding, managing, and conserving ecosystems (Crain & Bertness 2006; Boogert et al 2006; Laland & Boogert 2010). It is important for these initiatives to consider fully both the role that ecosystem engineering control webs [link to glossary] play in affecting the stability and productivity of ecosystems, and the consequences of human activities that destroy those webs of connectance.

If ecosystems are threaded by control webs arising through niche construction, then the disappearance of key niche constructors may lead to abrupt changes in the resources provided to other species. Populations that have become dependent on those resources may be unable to cope with the loss. This highlights the importance of preserving species that construct or maintain habitat and resources for other species (Crain & Bertness 2006; Boogert et al 2006; Ehlers et al 2008).