The Role of Mobile Genetic Elements in Evolution and Development

A new study in Evolution Letters suggests that transposable elements are important for both developmental processes and evolutionary diversification in snakes and lizards. Author Dr Nathalie Feiner explains her findings in our latest blog.

Mobile DNA sequences – transposable elements or TEs for short – are found in the genome of virtually all organisms. As their name implies, TEs can cut or copy themselves from one location in the genome to another. This can wreak havoc as insertion of TEs may interfere with gene regulation or in fact knock out entire genes. Cells therefore have mechanisms that prevent TEs from jumping, including DNA methylation and other epigenetic tools. Thus, TEs are not roaming freely through the genome, but are restricted from entering functionally important parts. Preventing TE invasion is particularly important when genes are regulated through spatial proximity to each other. The textbook example of this situation are the Hox genes, which are the key players in embryonic development with an ingenious mode of action: Hox genes are arranged in tight clusters and their position in the cluster defines their time and space of expression, and thus their effect on the patterning of the early embryo. It is therefore fitting that Hox gene clusters of mammals and other well-studied vertebrates have been found to be almost completely free of TEs. My new study reveals that Anolis lizards have broken this paradigm. Moreover, the invasion of TEs into Hox clusters of Anolis lizards can be linked to aberrant gene expression and increased rates of speciation.

Ever since the discovery of TEs, people have speculated about their evolutionary implications. One possible consequence of high TE activity is structural genomic variation. This may accelerate genomic incompatibility between populations; effectively making TEs engines of speciation.

Occasionally, TE insertions may also generate phenotypic novelty. As noted above, some genes are regulated through its proximity to other genes, which means that invasion of TEs can change expression of a number of genes simultaneously. Furthermore, since jumping TEs often drag along neighbouring genomic regions, they can translocate regulatory sequences that cause genes to be expressed in new cell types or at different stages in development.

While these are good reasons to expect TEs to promote evolution, examples are few and their role often appears idiosyncratic. An excellent group for a more systematic survey of TE-driven diversification are squamate reptiles, a group that includes lizards and snakes. Squamate genomes do not only appear particularly rich and variable in TEs, but their body plan is also highly malleable. Illustrative examples include the adaptive radiation of Anolis lizards and the repeated evolution of limbless and elongated bodies.

I decided to study how TEs have shaped the genomes, and in particular, the Hox clusters, of squamates. My first surprise was to discover that lizards possess more Hox genes than all other tetrapods since they retained some genes that other lineages have ditched. The second surprise came when I looked at the TE content of Hox clusters. Despite the high TE content in their genomes, squamates follow other vertebrates in generally protecting their Hox clusters from TEs. But there was one exception: I found massive invasion of TEs in the Hox clusters of two out of three Anolis species, with TE contents almost as high as the average place in the genome. 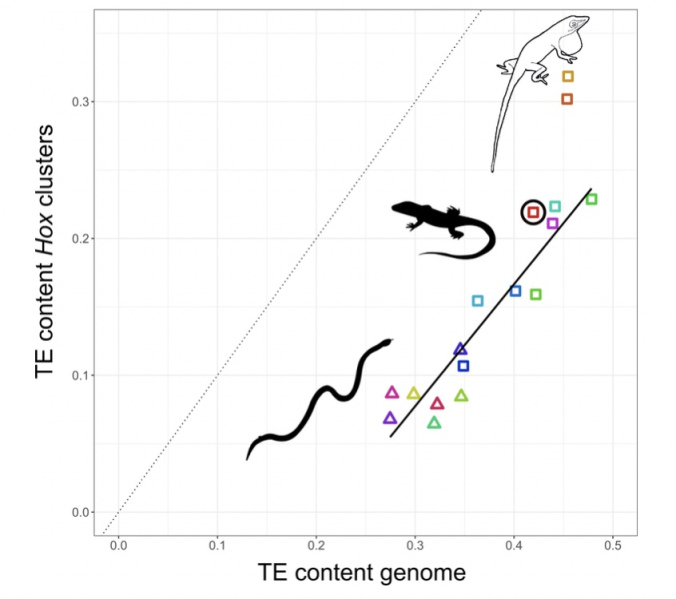 Why in Anolis? Anolis lizards are famous in evolutionary biology due to their adaptive morphological radiation involving high rates of speciation – amassing close to 400 species. In a previous study I showed that Anolis lineages with more speciation events in the past have more TEs in their Hox clusters. This new genome-wide study reveals that this signature of speciation is indeed pronounced in Hox clusters: only the two Anolis species from amply speciating lineages exhibit unusually TE-rich Hox clusters, while a third species (Anolis auratus, black circle in figure above) follows the norm and keeps its Hox clusters relatively free from TEs. Looking in detail at genome-wide TE landscapes of these three Anolis species, I discovered that the two species with TE-rich Hox clusters had a larger population of young, more active TEs in their genomes. In addition, the inferred timing of peak activity of these TEs broadly coincided with past speciation events.

These results suggest that – during speciation events – TEs are unusually active and proliferate throughout the genome. As a result, even crucial regions such as Hox clusters become invaded. Subsequently, TEs are removed from Hox clusters by selection until a ‘healthy equilibrium’ of TE content relative to the genome-wide TE content is reached. This equilibrium appears highly conserved as the Hox clusters of almost all lizards and snakes contain close to 50% of the global TE content. This proposed model generates a number of predictions that can be tested with genomic data from lineages with variable rates of speciation.

How then do some Anolis species cope with having their Hox clusters invaded by TEs? Clearly, the inflation of Hox clusters – increasing the distance between genes – does not disrupt the patterning of the early embryo. Genes located at one end of the cluster remain expressed early in the head of the embryo, while genes located at the other end are expressed late in the tail. However, the successive activation of Hox genes predicts that disruption, if occurring at all, should be most pronounced towards the end of the Hox clusters. I found that this indeed is the case: one out of four Hox13 genes showed aberrant expression in the two Anolis species with TE invaded Hox clusters, but this gene was expressed as ‘normal’ in other Anolis and more distantly related lizards. 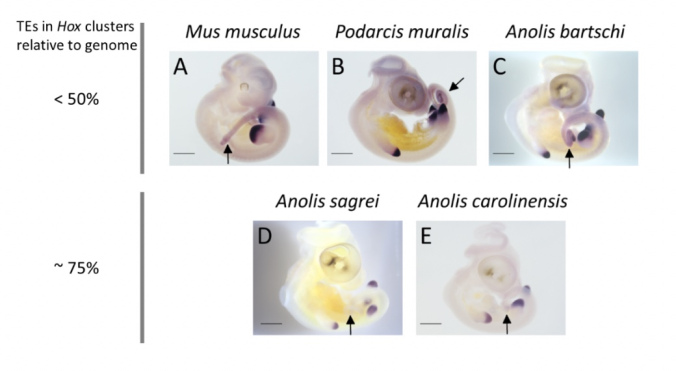 My new study reveals that, despite being THE textbook example of our conserved developmental toolkit, Hox genes can be tinkered with. What is more, the TE invasion of Hox clusters appear to be intimately linked to diversification. Now that Anolis lizards have shown us that it can happen, perhaps they can also show us why it happens and how.

Dr Nathalie Feiner is a Postdoctoral Fellow in the Department of Biology at Lund University. The original article is freely available to read and download from Evolution Letters.

The original version of this blog post was published on the Evolution Letters Editors’ Blog: https://evolutionletters.wordpress.com/2019/08/06/the-role-of-mobile-genetic-elements-in-evolution-and-development/