In the last week of September, the Max Planck Institute for Evolutionary Biology in Plön, Germany, hosted a workshop entitled Talking Evolution. Key topics discussed were niche construction, phenotypic plasticity, developmental bias, and extra-genetic inheritance. The workshop was organized by Noémie Erin, Alice Feurtey, Vandana Venkateswaran and Dominik Schmid, four early career researchers, and Maren Lehmann, the workshop coordinator at the MPI. Katrina Falkenberg interviewed the organizers about the workshop, how it came about and their highlights from the three days of talks and discussions.

Katrina: Where did the idea for the workshop originate?

Dominik: In one of our weekly journal clubs last summer, we discussed an interesting paper by Joseph Gage and colleagues that looked at phenotypic plasticity in cultivated maize crops (Zea mays L.). The paper embraces a gene-centric perspective, where plasticity is treated as a genetically encoded trait, and this led to an animated discussion on the causes and consequences of plasticity more broadly. That discussion revealed theoretical gaps in our understanding of the importance of phenotypic plasticity in evolutionary change. In a follow up journal club, we dove a little deeper into mechanisms of evolutionary change often ignored or overlooked by traditionally-educated evolutionary biologists. By this we mean, biologists who understand evolution as change in allele frequency within a population due to mutation, drift, gene flow and selection, in accordance with the teachings of Ernst Mayr, Theodosius Dobzhansky or Ronald Fisher, who contributed majorly in the development of the “Modern Synthesis of evolutionary biology”. This journal club included a more in depth conversation about the process of assimilation of plastic traits. We also discussed the infamous Nature comment debate piece, Does evolutionary theory need a rethink?, which we later came to understand misrepresented both sides of the debate. The discussion left us wondering: do we currently know enough about phenotypic plasticity, extra-genetic inheritance, developmental bias and niche construction? We came to the conclusion that understanding these four mechanisms, none of which had been directly investigated by any of us, would allow us to evaluate our own data more effectively and to come up with alternative hypotheses, especially in cases when our results don’t meet traditional expectations. Following this journal club, the participants resolved that we should hold a workshop on these topics at the institute.

Katrina: How did you structure the workshop? What do you consider worked best?

Dominik: The workshop was conceived primarily and quite selfishly to educate ourselves about topics on the periphery of our own work. We wanted to bring together high-profile and early career researchers in each field, using both empirical and theoretical approaches, and provide them a platform to discuss their work. It turns out there was a high demand to attend. Within weeks of opening the registration, we were able to fill all 45 spots available with big and also smaller names in each research topic.

In terms of structure, in addition to traditional talks and poster sessions, we included unstructured discussions to maximize exchange, as specifically asked for by Sonia and Kevin. Now, days after the workshop, we organizers are not only thrilled about how the talks and poster presentations went, but also how these one hour panel discussions opened a channel between scientists of all four topics. The keynote speaker for each topic led the discussion panel and made sure that all perspectives were heard. We touched on many interesting questions like “what is evolution?”, “are genes the major heritable unit?”, “can ecologically inherited niches be considered an external form of inheritance, or a developmental bias?” and “can development direct adaptive evolution?” Diverse perspectives in the audience made for enthusiastic and constructive discussion. 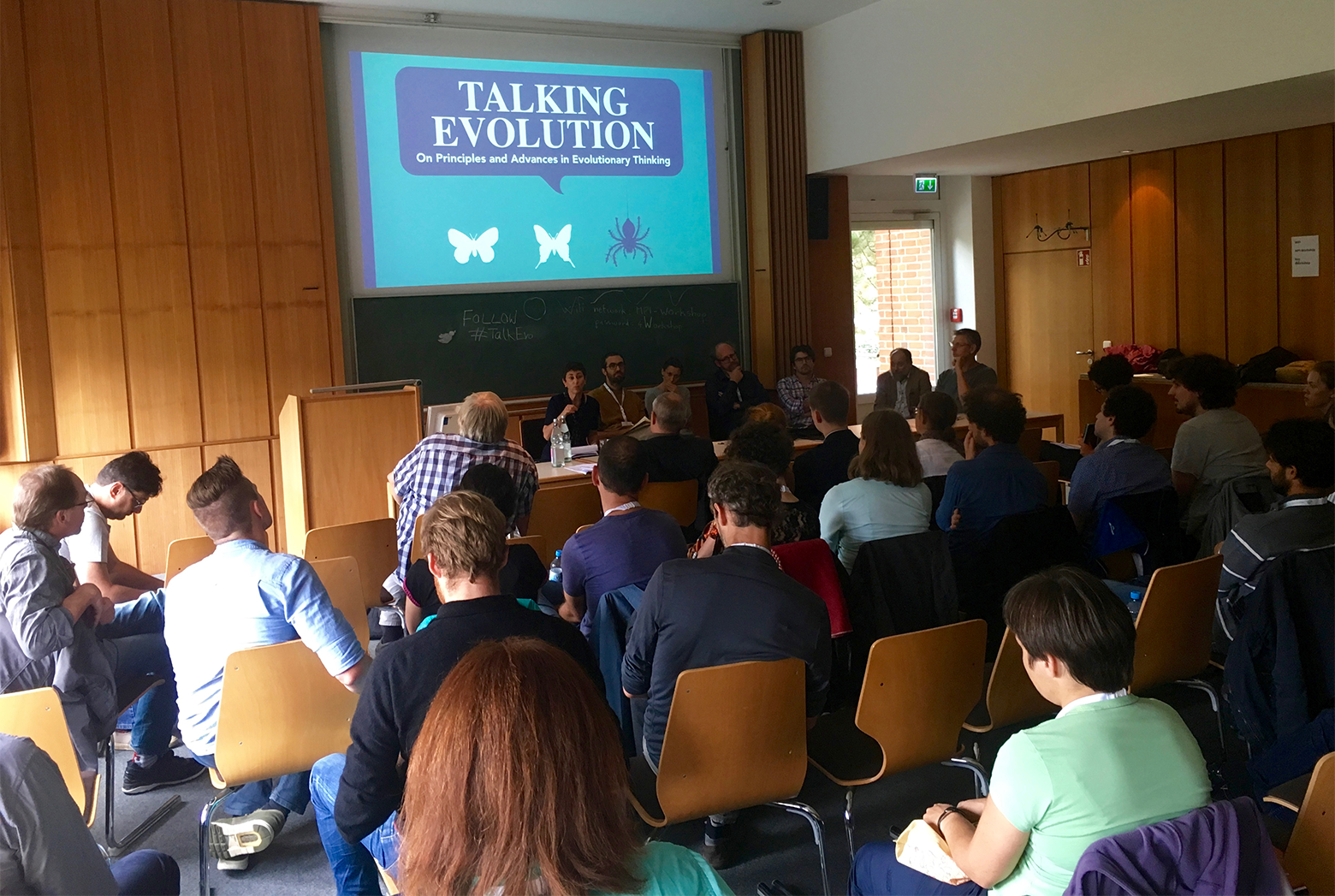 Katrina: Who were your keynote speakers and what did they talk about?

Dominik: Kevin Laland opened the workshop with an overview of the extended evolutionary synthesis and a more detailed analysis of niche construction, concluding with the role of niche construction in human evolution. Next up, Luis-Miguel Chevin gave a mostly theoretical talk on the role of phenotypic plasticity in adaptation and population persistence in new environments, finishing up with ongoing experimental work in his lab. Sonia Sultan talked about her transgenerational evo-devo (ecological developmental biology) work in Polygonum plants, claiming that “the norm of reaction is not an intrinsic (and stably heritable) property of genotype” – for instance it is also affected by parental and grandparental environments. She finished by suggesting that we define (and study) evolutionary change as “the change in the relationship between organisms and their environments”. Our developmental bias keynote was Paul Brakefield. Paul gave an overview of the topic before presenting his lab’s work on developmental bias in butterfly eyespots, focusing on previous experimental work, and more recent comparative studies. Ilkka Kronhom presented the first of two keynote talks on extra-genetic inheritance. Ilkka used modeling approaches to show that spontaneous epigenetic variation can lead to faster adaptation (than with genetic variation alone) and later, leads to genetic accommodation. In the final talk of the workshop, Troy Day tried to clarify where the controversy around extended heredity and the extended evolutionary synthesis lies, and presented a common theoretical perspective in order to formally articulate these differences.

Katrina: What were some of the key messages you have taken from the workshop?

Dominik: I think it became quite apparent throughout the workshop that aspects of traditional evolutionary theory shape our thinking and contribute significantly to the phenomena we study and the questions we ask. However, there remains unexplained variance in much of what we study. This unknown has driven many scientists to embrace extra-genetic inheritance, for instance, as a potential mechanism for adaptive evolutionary change, such as in the case of immune priming. Strong cases were also made for developmental bias as shown in butterfly eye spots, phenotypic plasticity in Polygonum plants and niche construction as shown for three-spined sticklebacks. We also recognized that much of the debate between EES and standard evolutionary theory “believers” (to use Troy Day’s term) arises due to misunderstandings or different uses of vocabulary, an issue only resolved by increased communication.

A thought-provoking talk was presented by Irene Adrian-Kalchhauser, in which she argued that extra-genetic inheritance is a platypus. Irene took us on a thought experiment to a pond, where groups of researchers tried to identify the pond residents. One group found evidence for an egg-laying organism with a tail and beak, which they identified as a duck. The second group found evidence for a nursing organism with fur and claws living in a borrow, which they identified as a rat. The third group was stung by something venomous and concluded there to be a snake. While all were right in their conclusions, they were all wrong and in fact, the organism in question was a platypus. Overall, Irene asserted that an increased exchange between distant fields may help develop more mechanistic hypotheses, something that the extended evolutionary synthesis aims to do. We should not only try to increase cross-talk between traditional evolutionary biologists and those who subscribe to a more extended synthesis, but also improve communication between researchers studying diverse aspects of the EES. This workshop, while small, was an important step in promoting this conversation. This is where we made a splash and this is why we count this workshop a success.

Katrina: It certainly was. There were a fantastic series of talks and poster presentations and some great discussion, in a very friendly and constructive atmosphere. Congratulations. Hopefully it will stimulate others to follow in your footsteps.

Visit the workshop website to view all talk and poster abstracts, as well as pdfs of selected presentations.

Scroll through the workshop twitter feed at #TalkEvo for talk highlights.