Organisms can respond plastically to novel conditions to generate functional variation. The specific adaptive phenotypes generated need not be the direct targets of past selection. Rather, they are often the expression of the more general ability of developmental processes to accommodate novel inputs adaptively, enabling functionally integrated responses to a broad range of conditions (West-Eberhard 2003; Kirschner & Gerhart 2007).

Moreover, through niche construction, environments can be changed by organisms to suit themselves. Consider the example of the earthworms which, despite living on land for millions of years, have retained the characteristic physiology of the freshwater animals from which they evolved (Turner 2000). For instance, earthworms produce large quantities of dilute urine, a trait that on land leaves them highly vulnerable to desiccation. Earthworms can only survive because they process the soil in ways that allow them to draw water into their bodies more effectively. They construct a simulated aquatic environment on land.

The key point is that the adaptive complementarity of earthworms and soils results to a large extent from the worms changing the soil through niche construction, rather than natural selection changing the worms to a typical terrestrial physiology.

Traditionally, the latter route has not been recognized as an alternative to adaptation – after all, the earthworm’s niche-constructing traits are adaptations too. However, the conventional stance assumes a particular model of biological causation, which advocates of the niche-construction perspective reject (Laland et al. 2011).

From the niche-construction perspective, the current selective environment was itself brought about through earlier niche construction, which caused the bout of selection. The attribution of all causal significance to selection fails to capture the true reciprocal nature of causation in this system.

Central to these debates are different assumptions concerning the independence or interdependence of the causes of phenotypic variation, differential fitness and inheritance, which are Lewontin’s (1970) three conditions for evolution by natural selection (Walsh 2015; Uller & Helanterä 2019). Traditionally, evolutionary biologists have assumed these processes are quasi-independent, but in practice they are often causally intertwined.

An orthodox stance would not recognize earthworm niche construction as an evolutionary cause but rather treat it as the outcome of earlier natural selection that favored earthworm soil-processing capabilities.

Implicit in this reasoning is the separation of the processes that generate variation (e.g., mutations in soil-processing activity) and the causes of fitness differences (e.g., the alternative environmental conditions that favored those mutations). This allows the explanation for the adaptive fit between earthworms and their soil environment to begin with that change in ancestral environmental conditions that generated selection for earthworm soil processing.

For instance, in the figure on the right sidebar, (1) a random mutation, (2) changes the earthworms’ soil processing, and (3) is selected because of beneficial effects on fitness.

In reality, because ancestral earthworm activity is itself the cause of the soil environment that favors mutations in soil processing, the causes of variation and fitness differences are not independent (bottom figure). The explanation for the adaptive fit between earthworms and their soil environment cannot begin with those ancestral external environmental conditions that elicited selection for earthworm soil processing, since those conditions were themselves products of earlier earthworm niche construction.

There is no longer a clean separation of selection and variation: these processes are causally intertwinedThe causal inter-dependence of the processes that generate phenotypic variation, differential fitness and inheritance. This confound is not resolved by pushing back the explanation to commence with an early episode of selection, as the selective environment is always partly constructed by organismal activities.

Worse, the processes underlying inheritance are also not independent of the causes of variation and fitness. The genetically specified propensity for soil processing that contemporary earthworms inherit only functions effectively as the source of earthworm adaptation to a soil environment because contemporary earthworms also inherit the ecological legacy of a modified soil environment that is the product of ancestral earthworm niche construction. 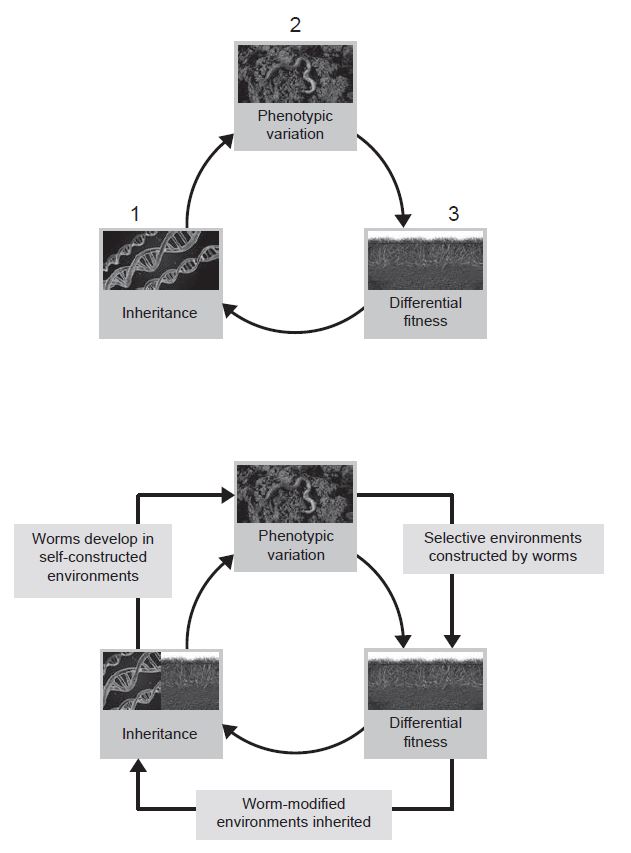 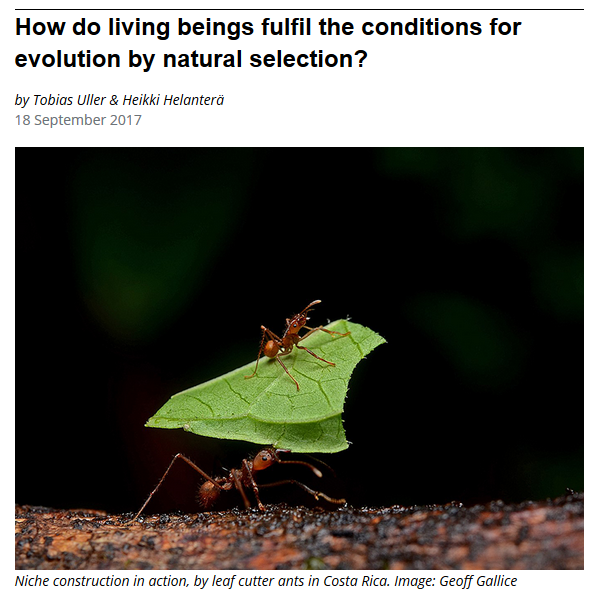 The evolutionary significance of proximate causes 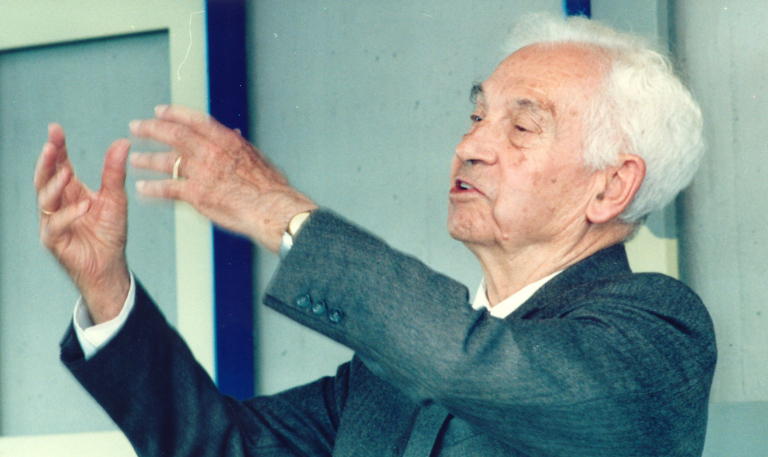 Mayr’s account of causation remains widely accepted today, with both positive and negative ramifications. One negative consequence was that Mayr insisted on a strict separation of proximate and ultimate causes:

“The clarification of the biochemical mechanism by which the genetic program is translated into the phenotype tells us absolutely nothing about the steps by which natural selection has built up the particular genetic program” (Mayr 1980).

This position was based upon a specific view of development:

“All of the directions, controls and constraints of the developmental machinery are laid down in the blueprint of the DNA genotype as instructions or potentialities” (Mayr 1984).

Mayr and his followers argued that developmental (i.e. ontogenetic) processes were irrelevant to the study of evolution. Niche construction is an ontogenetic process, and advocates of the niche-construction perspective, alongside others, have taken issue with Mayr’s treatment of causation (Laland et al. 2011).

There are two major problems with this line of reasoning:

First, as described above, the processes underlying variation, fitness and inheritance are causally intertwined. All organisms have always engaged in niche construction, going right back to the beginning of life. Hence there is no reason to assume that natural selection must be the first cause of any evolutionary episode. Causation in biological systems is reciprocal rather than linear, with natural selection and niche construction codirecting each other.

Second, not all evolutionarily consequential aspects of niche construction (nor all aspects of development, in general) are under genetic control. Niche-construction theorists, like many developmental biologists, regard organisms (and their environmental modification) as under-determined by genes. The changes that organisms bring about do not flow only from their adaptations, but also derive from plasticity, byproducts, and acquired characters.

The agency of organisms

Waddington and Lewontin both objected to any portrayal of organisms as passive victims of selection. They viewed organisms as active agents, both in their own development and in their evolution, with their activities a major determinant of fitness differences and hence of natural selection.

Agency is the intrinsic capacity of individual living organisms to act on, and in, their world, and thereby to modify their experience of it, including in ways that are neither predetermined, nor random (Laland et al. 2019). It is an essential and inescapable aspect of nature. Living organisms are not just passively pushed around by external forces, but rather they act on their world according to intrinsically generated but historically informed capabilities. Organisms are self-building, self-regulating, highly integrated, functioning, and (crucially) “purposive” wholes, which through wholly natural processes exert a distinctive influence and a degree of control over their own activities, outputs, and local environments. Indeed, organisms must have these properties in order to be alive (Schrödinger 1944).

Use of the term ‘agency’ in niche construction theory does not imply conscious, sentient, or deliberate action, nor vitalism (or any mystical power that imbues living tissue), nor a rejection of mechanistic explanation, nor the belief that living organisms possess any desire to evolve, or achieve some final state. Human niche construction sometimes is conscious, intentional, and deliberate, and may set out to achieve longer-term goals, but these are neither necessary nor defining characteristics of niche construction. Even for humans, a great deal of our niche construction is non-intentional. The claim that organisms are “purposive” means nothing more than that organisms exhibit goal-directed activities, such as foraging, courtship, or phototaxis, which are entirely natural tendencies with short-term local objectives, and that have themselves evolved.

In acknowledging the legacy of past natural selection in shaping how contemporary organisms manifest their agency in the world, niche construction theory rejects the suggestion that the actions of organisms are fully explained by prior selection. Organisms are influenced, but seldom if ever fully determined, by their genes, and their activities are shaped by developmental information-gaining processes as well as selection. They are not merely objects through which the causal explanatory power of natural selection flows; organisms are active agents that transduce and filter genetic and environmental inputs. 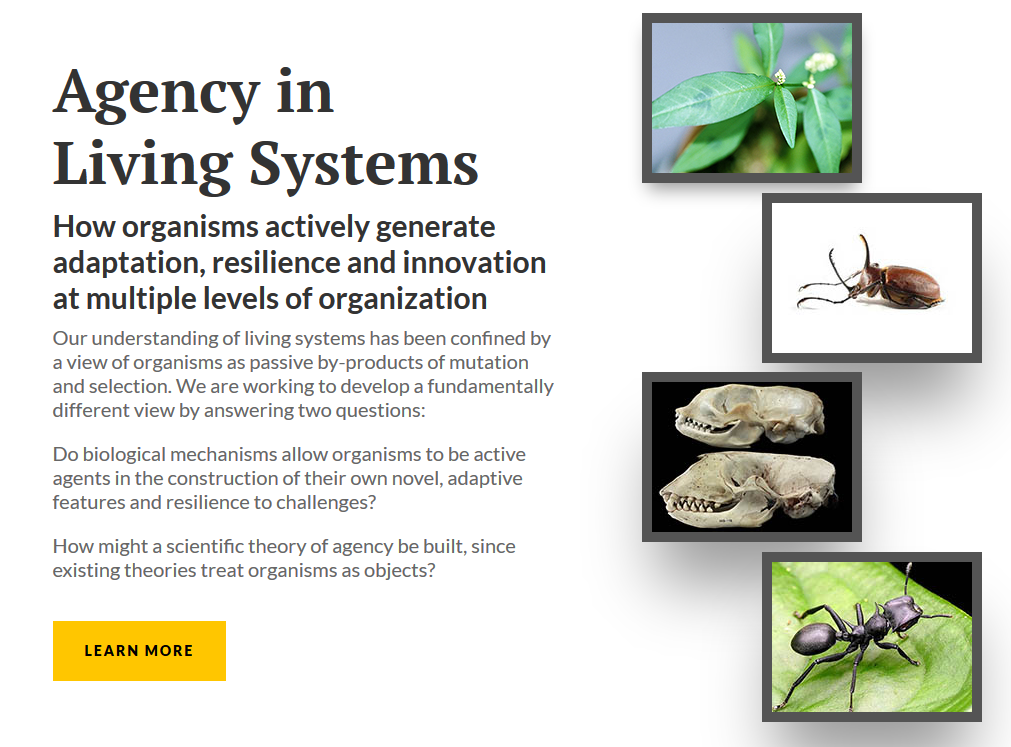 Moving away from misleading metaphors

Evolutionary theory is often viewed as a fusion of Darwinian and Mendelian insights. Notwithstanding the immense progress that these achievements engendered, Richard Lewontin (1983) argues that the legacies of Darwin and Mendel include misleading metaphors that:

are responsible for certain difficulties in biology, difficulties that prevent us from some kinds of further progress and which keep us locked into a rigid framework of thought about the development and evolution of organisms.

Mendel’s view of organisms as the manifestation of autonomous internal ‘factors’ (i.e. genes) with their own laws, germinated into a post-Synthesis metaphor in which ontogeny ‘is seen as an unfolding of a form, already latent in the genes, requiring only an original triggering at fertilization and an environment adequate to allow ‘normal’ development to continue’. We now know that developmental processes are hugely environmentally contingent.

Darwin’s view of organisms as passive objects moulded by the external force of natural selection encouraged a conception of evolution in which ‘the environment “poses the problem”; the organisms posit “solutions”, of which the best is finally “chosen”. The metaphor of selection, inspired by the efficacy of artificial selection, continues to encourage a view of organisms as passive objects upon which external forces act.

Lewontin argues forcefully that these metaphors are misleading. Similar points have been made by Oyama (1985), Griffiths and Gray (2001, 2004), Sultan (2015) and many others.

Lewontin (1983) also took issue with the adaptive landscape metaphor, which is widely used to visualise the fitness of organisms as a function of genetic or phenotypic state. Evolving organisms are general construed as climbing the fitness landscape to a local peak through the action of natural selection. In practice, landscapes are not static. Lewontin pointed out that through their niche construction the organisms themselves alter the landscape, so that moving across a landscape is like walking on a trampoline.
Recently, Tanaka et al (2020) proposed a dual-landscape model of adaptation with natural selection and niche construction, and used it to analyse the dynamics of three cases of microbial evolution.