The backgroundThat organisms commonly modify their local environments is beyond question but whether and how this ‘niche construction’ affects evolution remains disputed. Some researchers, myself included, believe that organisms change environments in systematic and reliable ways – for instance, by manufacturing nests, burrows and benign conditions for the constructor or their descendants. The inspiration for this way of thinking is a series of influential essays written by Harvard evolutionary biologist Richard Lewontin (1982, 1983, 2000).Lewontin argued that through modifying, regulating and even defining environments, organisms inadvertently modify the natural selection that they and their descendants experience. If that environmental regulation by organisms is systematic and directional, it can potentially impose biases on selection, and thereby influence evolutionary outcomes. This idea lies behind the suggestion that niche construction is an evolutionary process (Odling-Smee et al 2003). 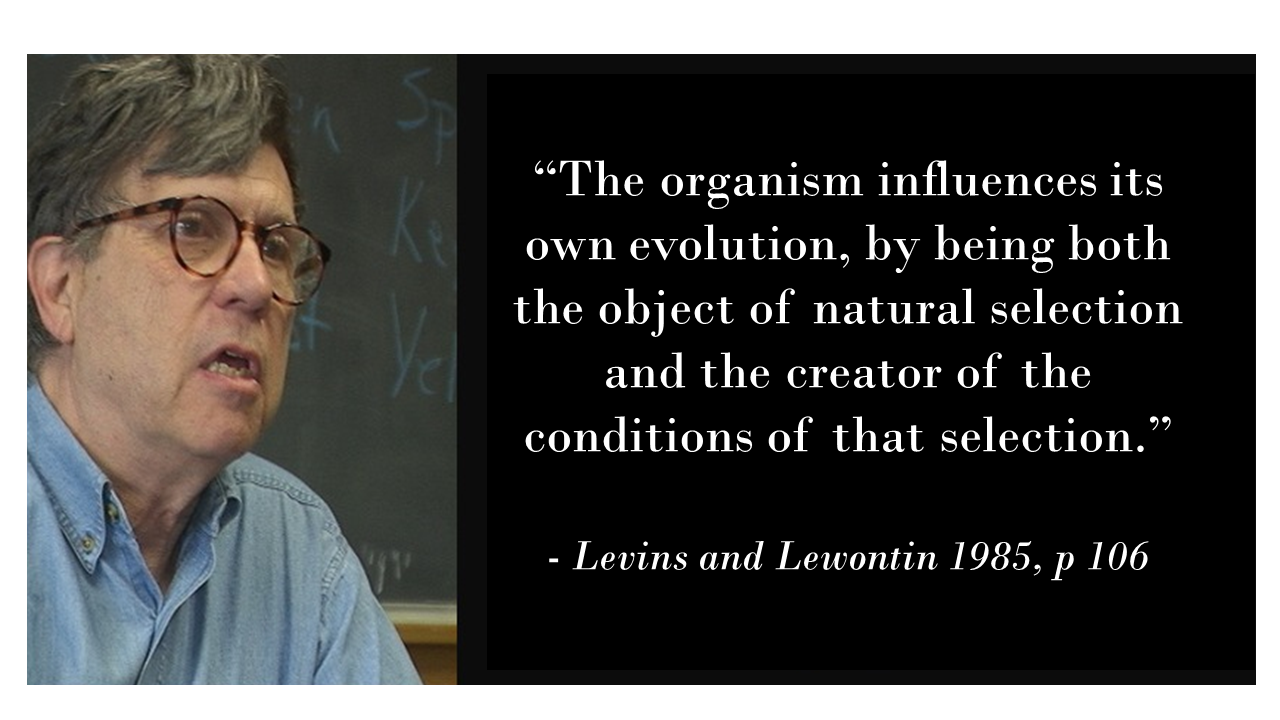 In fact, this reasoning can be traced back further to the writings of Nobel Prize winning physicist Erwin Schrodinger, who pointed out that living organisms are far-from-equilibrium systems relative to their surrounds, and that to preserve their out-of-equilibrium status and create order organisms must actively do work (i.e. they must engage in niche construction). Schrodinger pointed out that an organism’s niche construction cannot be random – organisms must change environments in systematic directional ways in order to survive. 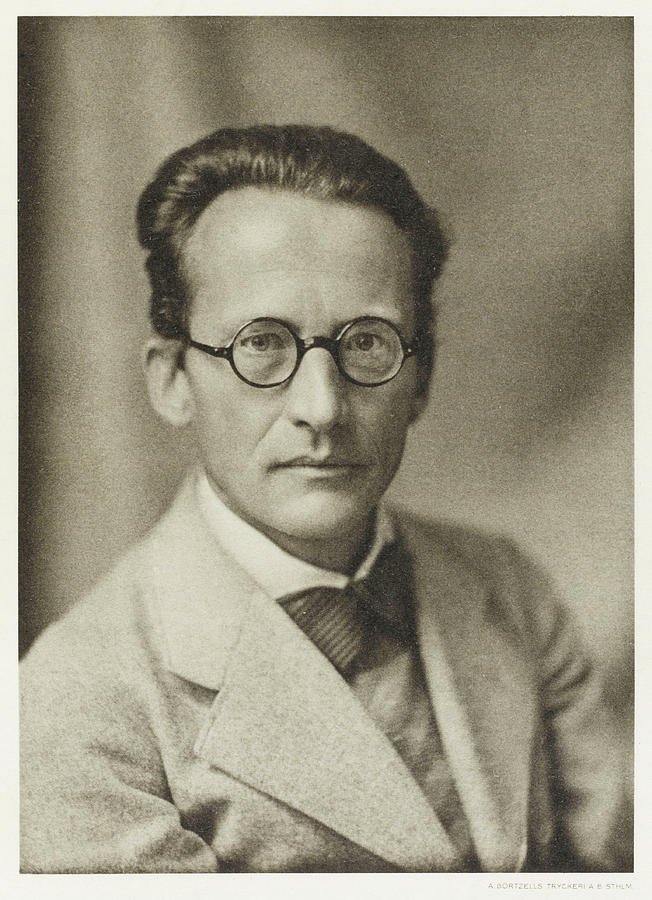 While niche construction theory has had considerable impact across a range of academic disciplines, within evolutionary biology these suggestions remain contentious. Most evolutionary biologists have tended to assume that the changes brought about in environments by organisms will probably be little different from other sources of environmental change. To quote Futuyma (2016):

Likewise, in a paper that I coauthored with some friendly niche construction theory sceptics, published in Evolution in 2014, my coauthors questioned whether organisms did modify environments in a systematic way, and also expressed reservations about whether this issue would prove testable. This was a challenge, but a welcome one. If niche construction is going to be a useful concept, it must be empirically tractable. We set out to find a way to test it.
A way forwardIn principle, a straightforward way to determine whether organism-modified environments differ from other forms of environmental change in the natural selection that they generate is to compare measures of selection (selection gradients) deriving from the two kinds of environments. It is well recognized that natural selection is highly variable in its strength and consistency, and consideration of the source of selection might partly explain this.
We tested the predictions that organism-constructed sources of selection that buffer environmental variation (for instance, nests; see Figure 1, case 1) will result in (i) reduced variation in selection gradients, including reduced variation between (a) years (temporal variation), and (b) locations (spatial variation), and (ii) weaker directional selection, relative to non-constructed sources, such as climatic variables (see Figure 1, case 2). 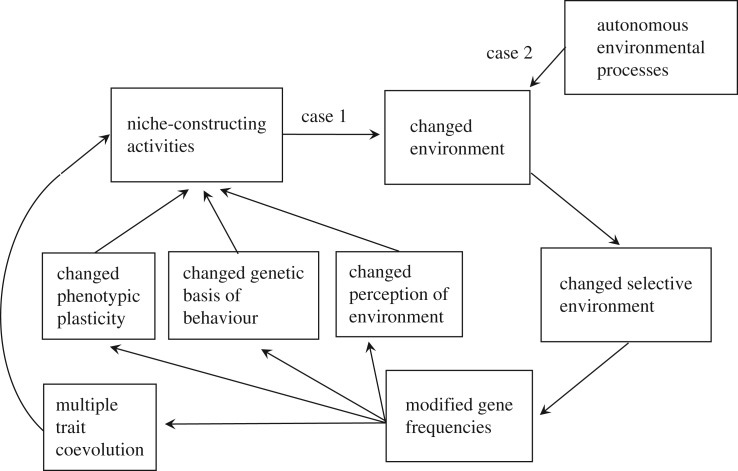 Figure 1. The cycle of cause–effect relationships associated with niche construction. The self-reinforcing nature of this cycle generates much less variation in the source of selection than where there is no feedback from organisms’ activities to the environment. Here, ‘autonomous’ refers to environmental processes that are not affected, or only weakly regulated, by the activities of organisms. Consequences of niche-constructed aspects of the environment (case 1) may be qualitatively different from environmental changes resulting from autonomous environmental processes (case 2), leading to experimentally detectable differences in selective environments, gene-frequency changes and patterns of trait coevolution in the two cases. Figure taken from Laland et al. 2017.

These expectations follow because organisms partly control their environments by building and regulating conditions in nests, burrows, mounds, webs, etc, which typically acts to ensure that key environmental variables remain within suitable tolerance ranges. Organisms also choose habitats, resources, prey, foraging locations, nesting sites, oviposition sites, resting sites, and mates, and these decisions help to ensure that the organism and/or their descendants experience suitable conditions. It is well-known that, across diverse taxa, nests buffer climatic fluctuations that have been found to be metabolically costly, and nest building is thought to have evolved partly to fulfil an offspring-insulation function.
Some species exploit the regulatory properties of other animal’s constructions. Monitor lizards, including the Nile monitor (Varanus niloticus), heath monitor (Varanus rosenbergi) and lace monitor (Varanus varius)1, for instance, have evolved the behavior of laying their eggs inside termite mounds, exploiting the termites’ thermoregulation of the nest (Hansell, 1984). The heath monitor is thought to be an obligate termite mound nesters as their range is across parts of southern Australia that is too cold for their eggs without the insulation provided by termite mounds. Irrespective of whether the inhabitants are the nest builder, their offspring or inquilines, the conditions experienced by developing offspring are likely to be buffered relative to the external environment. 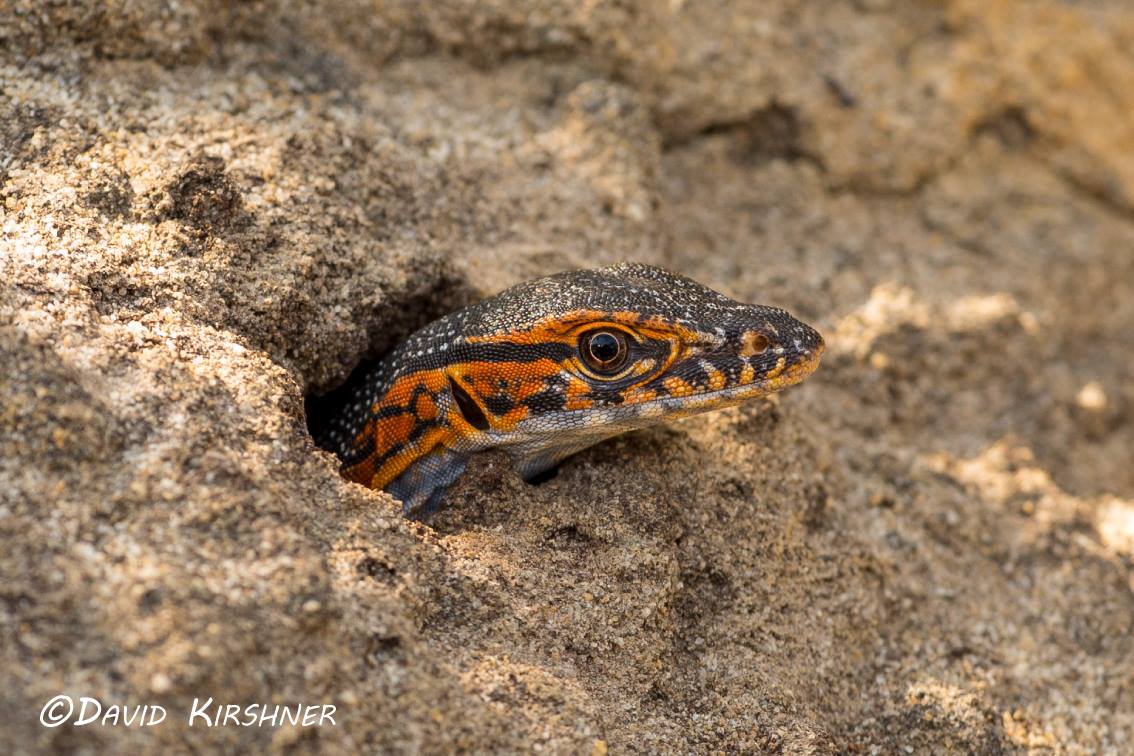 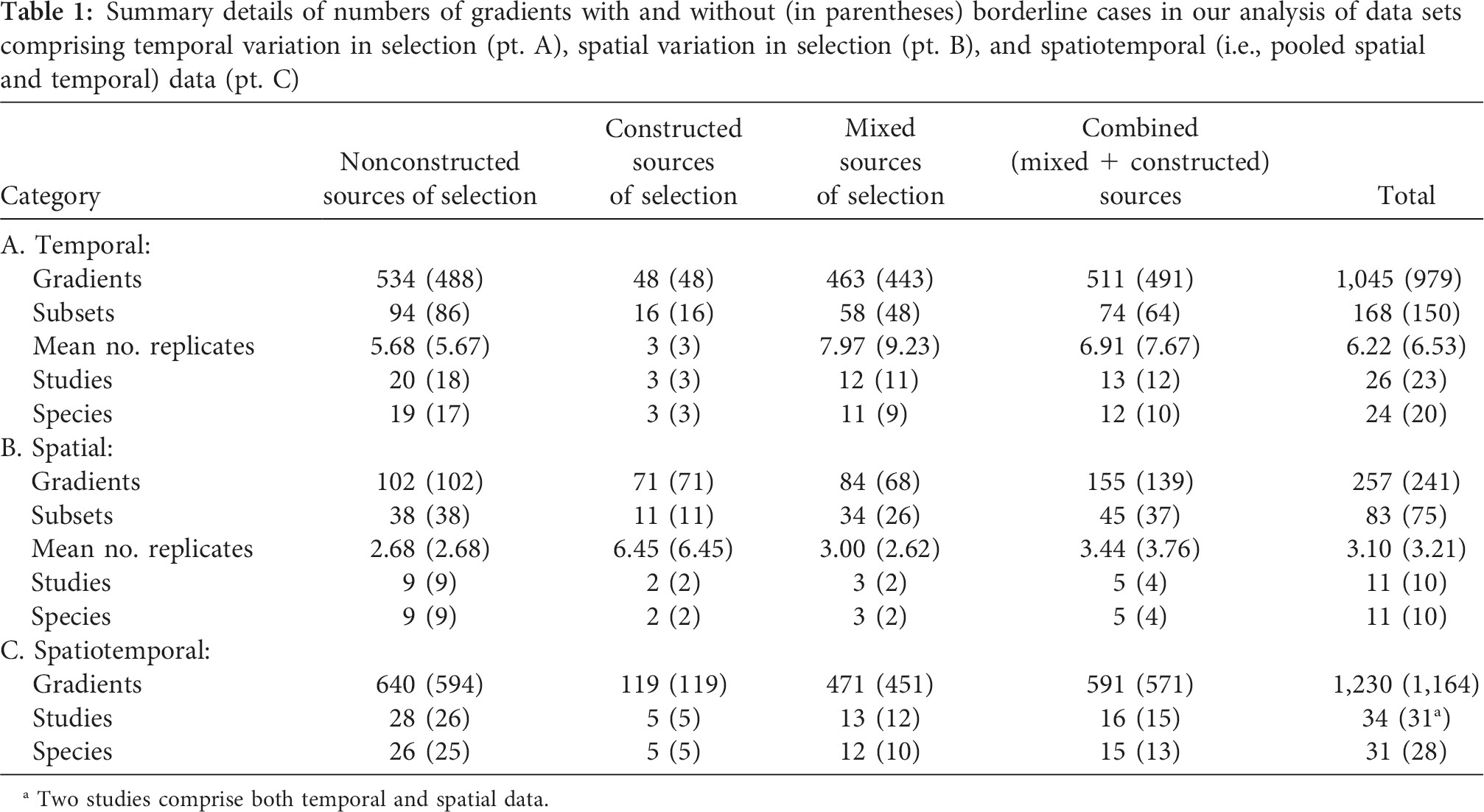 We then conducted meta-analyses of data from published studies of selection in the wild to test whether components of environments constructed by organisms differ from non-constructed environmental components in the magnitude and variance in selection generated.The challenge of categorization A major difficulty to overcome was the challenge of producing a robust and reliable means of categorizing cases as ‘constructed’ or ‘not’. Problems arise because in many, perhaps most, traits and studies, it was possible to envisage an influence of both organismal activity and autonomous environment. The contention surrounding niche construction theory left it doubly important that this concern be addressed.  After much effort, a rigorous procedure was devised (Figure 2, see Appendix in Clark and Deffner et al for details).

Figure 2.  Categorization of niche construction. Figure A1 of Clark and Deffner et al.

In simple terms, identified sources of selection were categorised as ‘constructed’ if they were dominated by environmental factors chosen or manufactured by organisms, such as nests, burrows, webs, or microenvironments, and regulated within bounds by organismal activity. Conversely, environmental agents were categorised as ‘non-constructed’ in cases where the focal trait was not, or was only weakly, influenced by niche-constructing activities.

Most authors of the studies included in our database explicitly stated what they assumed to be the primary source(s) of selection, which we accepted assuming author expertise of the study system.
Two neutral coders (Andrew Clark and Dominik Deffner) independently coded the data blind to its actual value. Andrew and Dominik were ‘neutral’ in the sense that they had not previously published on niche construction, nor invested in the issues. We also had on our team John Endler, a self-professed niche construction theory sceptic and expert on measuring natural selection in the wild. Their coding exhibited high inter-observer agreement, which was important because it demonstrates that using our categorization procedure, two individuals will code traits in published studies as ‘constructed’ and ‘non-constructed’ in a consistent fashion.
To check the robustness of the conclusions to categorization error, we conducted simulations that deliberately mis-categorised 10% of the data. The fact that this did not affect the conclusions is reassuring.

Addressing disagreements over the definition of niche constructionEnvironmental regulation and habitat choice are both activities that function to preserve an adaptive match between the features of organisms and factors in their environments, and both are subsumed within the wider category of ‘niche construction’ (Odling-Smee et al., 2003). However, some researchers – notably Richard Dawkins (2004) – have questioned the utility of such a broad conception, preferring to restrict niche construction to the construction of artefacts, or the activities of a focal species (see also Scott-Phillips et al., 2014).
By repeating our analyses for broad and narrow definitions of niche construction, we were able to explore whether or not habitat modification and choice generated equivalent effects on selection. Likewise, by separately analyzing cases in which relevant environmental regulation was undertaken by the focal species or another species, and by a single or multiple species, we were able to evaluate whether and how these differences impact selection.

ResultsOur study confirmed that natural selection deriving from organism-constructed sources exhibits reduced temporal and spatial variation in selection gradients, and weaker (i.e. reduced intensity of) selection, compared to non-constructed sources. Our results are broadly consistent across analyses, hold for (i) broad (including animal choices) and narrow (physical artefacts only) definitions of niche construction, (ii) whether the focal species or another species engages in the niche construction, (iii) for cases in which a single or multiple species engage in functionally equivalent niche construction, and (iv) are little affected by taxonomy. Figure 3 illustrates the reduced variability of selection deriving from organism-constructed environmental components, while Figure 4 from the same paper illustrates the weaker strength of selection associated with niche construction. 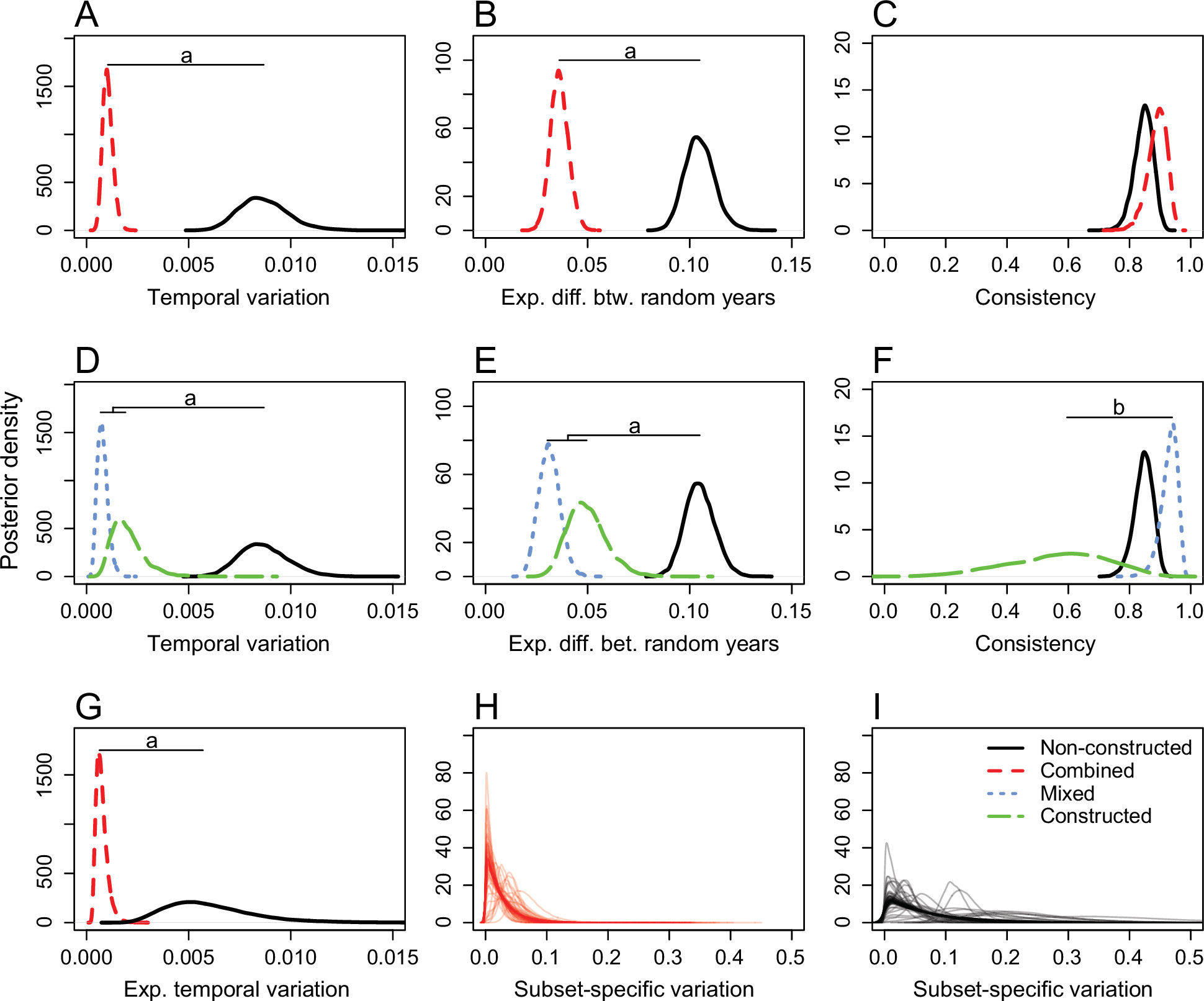 The fact that regulation through physical artefacts or by habitat selection (Figure 5), by a single or multiple species, or by the focal species or another species, generate similar impacts on selection supports the hypothesis that the functional equivalence of regulatory activity is often more important than the precise identity of the constructor in determining the selection that ensues, and helps to justify a broad definition of niche construction (Odling-Smee et al, 2003)

Figure 5. Marginal posterior probability distributions for temporal variation using the combined category model. Temporal variation is smaller in the combined (constructed + mixed) category than in the nonconstructed category, irrespective of whether niche construction (A) arises through the manufacture of physical artifacts or habitat choice, is by the focal species or another species (B), or involves a single or multiple species (C). a = 99% credible intervals for the two distributions do not overlap. Figure 2 of Clark and Deffner et al.

Implications/significance Our study provides evidence that organism-driven modifications of the environment differ in important respects to other (non-constructed) changes in the environments. While these findings will be intuitive to many researchers, they have been disputed (Scott-Phillips et al, 2014), and so an empirical demonstration was required.

The idea that regulatory behaviour might constrain evolution has been sporadically referred to in a literature that dates back at least to Bogert (1949), and his suggestion that reptiles can buffer selection through their behaviour. Organism-derived regulation that buffers selection extends beyond direct behavioural adjustments to encompass buffering mediated by artefacts and other environmental resources, and beyond animals to potentially any species that experiences environmental resources or conditions regulated by one or more organisms.

A potential weakness of the study concerns the accuracy with which sources of selection can be identified by authors. Our methodology does not require all environmental factors to be completely pinned down, but rather the general category to be identified, and at least sometimes that is straightforward in practice. Nonetheless, this data will be subject to human error. Ideally, future studies of selection in the wild would record relevant ecological variables, including environmental factors influenced by the activities of organisms, and formally relate these to variation in selection

It is important to recognize that not all niche construction is regulatory in character, and other changes that organisms bring about in environments are predicted to have different effects on selection (in some circumstances, strengthening selective responses) (Laland et al 2017). We hope that future studies will put these additional predictions to the test.

The investigation underlines the importance of understanding the nature of the source of selection and the possibility that the activities of organisms may shape selection in a manner not yet fully appreciated.

1. Many thanks to David Kirshner (Sydney Zoo) for pointing us to some of these fascinating examples.

See Clark et al (2019) for references cited in this article.