Much of evolutionary biology is motivated by one basic question: what determines biological diversity? Traditional explanations emphasize the role of natural selection acting on variation among the individuals that make up a population, sorting them into fit and less fit versions, thereby creating adaptation and diversification across generations. However, recent advances in the study of host-associated microbes has complicated this understanding. The microbial symbionts now known to reside in and on virtually all eukaryotic organisms exert a vast array of influences on their hosts. Processes as diverse as early embryonic development, gut formation, digestion, and the regulation of some behaviors have now been shown to be influenced by the microbiota (see a previous blog post). Though this line of evidence is exciting, the degree to which microbes and hosts may influence each other’s evolution remains largely unexplored.

Whether or not such long-term evolutionary impacts manifest is thought to depend, among other things, on the mode by which hosts acquire their microbial partners. In general, hosts may be colonized by microbes in one of two ways. Under horizontal transmission, microbes are acquired from the environment anew every generation. In this case the ‘environment’ can be abiotic (such as the soil, air, water, or food source), or biotic (direct interactions with other animals). In contrast, under vertical transmission microbes are passed directly from a parent, usually the mother, to the offspring either before, or immediately following birth. Theory predicts that host-associated microbial organisms should have the greatest potential to affect host evolution, and vice versa, when microbiota are transmitted vertically. Because vertical transmission ensures continuous associations between host genotypes and microbial genotypes, it allows natural selection to operate on host-symbiont teams, selecting for the most fit partnerships depending on circumstances, including the potential to result in host-symbiont co-diversification among populations and species. Yet whether such co-diversification actually occurs even if vertical transmission is ensured, and how rapidly it may manifest in natural populations and with what consequences remains to be assessed broadly.

In our paper published today in Ecological Entomology, we sought to test for evidence of host-symbiont coevolution in dung beetles of the genus Onthophagus which is, with over 2,000 extant species, one of the most diverse genera in the animal kingdom. In particular we focused on two species, Onthophagus gazella and O. sagittarius. Native to South Africa and Southeast Asia, respectively, and separated by ~37 million years of evolutionary time, both species were introduced to Queensland, Australia approximately 50 years ago in an effort to manage cattle dung accumulation and improve pasture health. Most Onthophagus depend on mammal dung as their sole food source throughout all stages of their life, and O. gazella and O. sagittarius are particularly fond consumers of cow dung. Prior studies showed that cow dung is a challenging food source for insects, low in many essential nutrients but rich in complex plant derived macromolecules like lignin and cellulose that are famously hard for animals to digest without help from microbial friends. How dung beetles have not just survived but flourished and diversified on such challenging food sources has long captivated evolutionary biologists. However, recent studies by our research group were able to show that larval dung beetles rely on gut microbiota to digest dung, and that these microbiota are transmitted from mom to larvae with the help of a so-called pedestal, an accumulation of mom’s own fecal matter onto which she lays each egg. Upon hatching from the egg, the larva then consumes the pedestal, thereby inoculating itself with its mother’s gut microbiota. Once that is achieved the larvae then turns to consuming a so-called brood ball, a spherical or ovoid mass of dung that its parents provisioned for it in an underground chamber. Given this remarkable way of ensuring faithful transmission of microbial symbionts from parent to offspring we wondered whether the extraordinary species richness of Onthophagus beetles might in some ways have been shaped by the developmental symbioses between dung beetle hosts and their gut symbionts.

In our study, we specifically sought to test whether 1) different Onthophagus species have evolved to associate with different host beetle-specific microbial communities as might be expected if host-microbiota co-evolution was occurring, and 2) if alterations to the microbiota could be passed on through generations, thereby resulting in potentially evolutionarily important transgenerational fitness effects. To address these questions, we used O. gazella and O. sagittarius that had been collected in Queensland, Australia where both species now co-occur on the same pastures and, often, dung pads. We allowed both species to reproduce in the lab, thereby producing brood balls, pedestals, and eggs for both O. gazella and O. sagittarius. We then extracted the eggs, surface-sterilized them to ensure no bacteria might accidentally hitchhike with them, and then transferred them to artificially constructed, standardized brood balls and positioned them either back onto the pedestal produced by their own mother (self-inoculated) or one produced by an adult female of the other species (cross-inoculated). We then closely watched the development of the beetles in each of our four treatment groups, measuring parameters such as their mass at important larval and pupal time points, the time it took them to reach these milestones, and their survival rates.

We found that exchanging pedestals between these two Onthophagus species lead to significant reductions in fitness – manifest in lower survival rates, extended developmental time, and decreased size at critical larval and pupal stages. At the same time, we observed that these effects weren’t exactly even for both species: for example, the survival of O. sagittarius was much more dependent on larvae having access to their original pedestal compared to O. gazella. These results provide strong support for the hypothesis that different Onthophagus species rely on different and functionally non-equivalent microbial symbionts. Additional support for this conclusion emerged when we reared a second generation of O. gazella and compared the offspring of mothers who as larvae had access to their own pedestal, to that of mothers who as larvae were forced to contend with an O. sagittarius pedestal. We predicted that if functionally significant microbiota were indeed transmitted vertically, mothers would have to pass on whatever microbiota we imposed on them, and possible adverse effects on growth or survival should thus manifest again in subsequent generations. We found precisely that: adult body size – a major determinant of male and female fecundity – of second generation beetles was significantly reduced if their mothers had acquired a heterospecific microbial community during their own larval development, as compared to second generation beetles born to mothers provided their own, normal, microbiota. These results thus suggest that disrupting the vertical transmission for even just a single generation has the potential to cause phenotypic effects that can cascade through multiple generations. 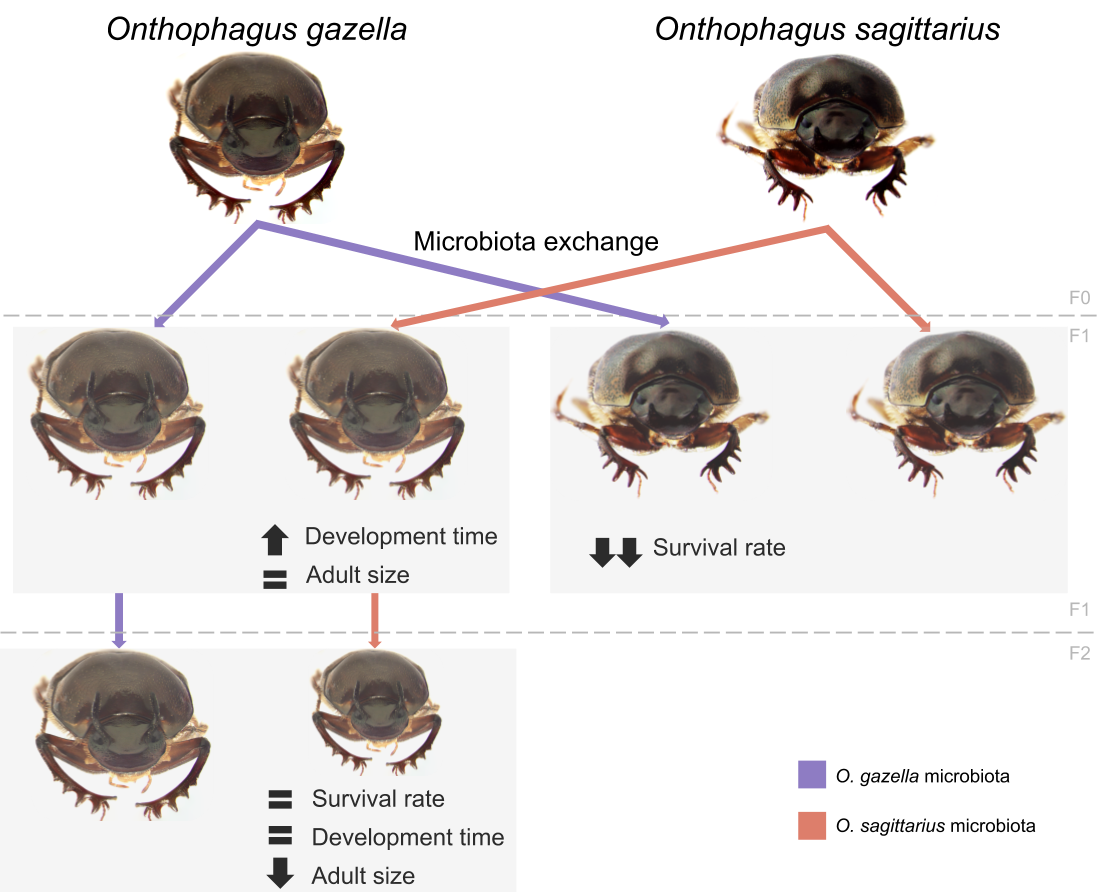 Together, our results show that Onthophagus dung beetles associate with non-interchangeable, host species-specific microbial communities that have the potential to affect host growth, development, and fitness in a lasting way. More generally, our results are consistent with the possibility that beetle host-microbiota co-evolution contributed to the immense radiation of Onthophagus species across several continents but also dung types, though much more work remains to be done to validate such a scenario. Intriguingly, our comparison of O. gazella and O. sagittarius has further, specific implications: both species occur in sympatry and often syntopy, i.e. the exact same dung pad, but vertical transmission appears to be effective enough to keep both gut microbial communities unique and apart. Further, as part of the purposeful release of both species under the oversight of the Commonwealth Scientific and Industrial Research Organization (CSIRO) in Australia their eggs were surface sterilized and reared in the lab prior to release, which should have disrupted the vertical transfer of microbiota. Our results suggest that either the sterilization procedure was ineffective, or both species managed in less than 50 years since introduction to reassemble their gut microbiota from locally available microbial populations, and then heritably diverge in their composition. Clearly, many interesting opportunities for future research into the significance of host microbial interactions in development, ecology, and evolution exist in these remarkable organisms.

This work is part of project #13 in the EES research program, entitled Adaptation through niche construction and microbiome function in Onthophagus beetles, under the theme Inclusive Inheritance.