Is social transmission a forgotten force in coevolution?

During the last decade it has become impossible to ignore that social transmission of information occurs across the animal kingdom:1 humans and non-human animals alike learn by observing others. An explosion of studies demonstrate that species as diverse as Drosophila fruit flies to humpback whales either copy the behavior of others, or use it to alter their behavioral responses at a later date (social learning). If female fruit flies observe males attracting other females, any other males that share similar markings also become sexier,2 for example, while new methods for catching fish spread rapidly among humpback whale populations, mapping on to social networks of interacting individuals.3 Interestingly, social transmission does not seem to be a hallmark of socially-complex species.4 In fact, even solitary fish species are just as likely to use social information as those that live in shoals.5

This burgeoning catalogue of examples across the animal kingdom is helping to elucidate how and why social transmission occurs.6 However, the ubiquity of this process of learning by observing others suggests that it may also have broad consequences across ecological communities. Social transmission allows behavior to spread rapidly among peers (horizontal transmission) and be inherited non-genetically (non-genetic inheritance). Consequently, innovative behavior or knowledge about a new environment spreads more quickly through populations than personal learning or genetic inheritance typically allows. This is key because it means that the ways in which whole populations (or species, depending on social connections among populations) interact with others might change fast.

When the phenotypes of one species generates selection on another, we call this coevolution. Predators that run faster, for example, have higher fitness because they are more able to catch prey. This then exerts greater selection pressure on prey, selecting for those that are more effective at hiding cues about their locality (or running faster themselves!). Coevolution is recognized as one of the most powerful drivers of biodiversity, so if social transmission of information shapes the likelihood that these interactions will take place, can it alter how we think about this evolutionary process?

Our recent work provides just such an example.7 Many invertebrates, plants, and some vertebrates have evolved a strategy called aposematism to protect themselves from being eaten. This strategy works because it is a warning signal: species display bright conspicuous colors or patterns to alert educated predators that they are not good to eat. Aposematism is more effective than just producing a toxic chemical defense, for example, because it means that prey are left unmolested. Explaining how this strategy can evolve, however, has been a long-standing puzzle for evolutionary biologists as warning signals only work if predators are educated – how do easily-detectable prey survive until every predator learns? We found that social transmission among predators can provide an answer.

Using a combination of experiments with captive wild great tits and mathematical models, we demonstrated that birds can learn to associate a prey signal with its unpalatability much more quickly if they have a chance to also observe another bird eating it first. We trained wild great tits to eat artificial prey in a ‘novel world’, devised by co-author Johanna Mappes from the University of Jyväskylä in Finland. This allowed us to exclude any innate preferences or biases towards different prey types so we could be confident that our novel warning signal really was novel. For half of the birds, we presented a video playback where they could learn about the palatability of the prey item before entering the novel world. When great tits eat something disgusting (in this case a novel prey item with a warning signal) they shake their heads and wipe their beaks. We found that just one opportunity to watch this behavior (i.e. social information about prey palatability) was enough for the majority of the birds to avoid the easily-found warning signal and search for more cryptic prey instead. Hanna Kokko (University of Zürich) then demonstrated with a mathematical model that social transmission of this kind could be enough to help protect small populations of this prey phenotype sufficiently long enough for it to reproduce and reach fixation. If social transmission did not occur, then this became almost mathematically impossible. Theory predicts that prey must be locally abundant for predator education to occur or be maintained.8 Our work shows that social transmission might reduce this problem for prey as many predators can (potentially) learn from an encounter with a single prey individual.

One of the characteristics of antagonistic coevolution is diversification – as new selection pressures arise, hosts and parasites evolve different defenses or offences. If the success of these different forms then depends on the frequency in which they are encountered we have examples of frequency-dependent selection. Social transmission can directly affect this process if information shared is more likely to be about the most common type.

We have found exactly this occurring in the interactions that take place between brood parasitic cuckoos and one of their favorite hosts in Western Europe, the reed warbler.9 Naïve reed warblers learn to attack a cuckoo caught at their nest after they see their neighbors’ attack first. This mobbing behavior deters cuckoos from laying their egg, and observing neighbors mob also increases the likelihood that hosts will recognize and reject the cuckoo’s egg, even if it avoids attack and manages to lay. Therefore, it pays cuckoos to avoid detection as “word will spread”. Like in many cuckoo species, female Common cuckoos come in two different guises – one is grey like the male and the other is a rufous brown. While their frequency varies in time and space, why remained a mystery. We conducted field experiments to test if it was a way to foil social transmission. By presenting cuckoo models of either color to neighbors, we discovered that social transmission among reed warblers is too specific – reed warblers only increase their defenses against the cuckoo color type that they observe their neighbors mob. This means that social transmission ensures rare forms have an advantage as alerts only go out about the common cuckoo color. It remains unknown just how uncommon a color morph must be to retain this advantage. 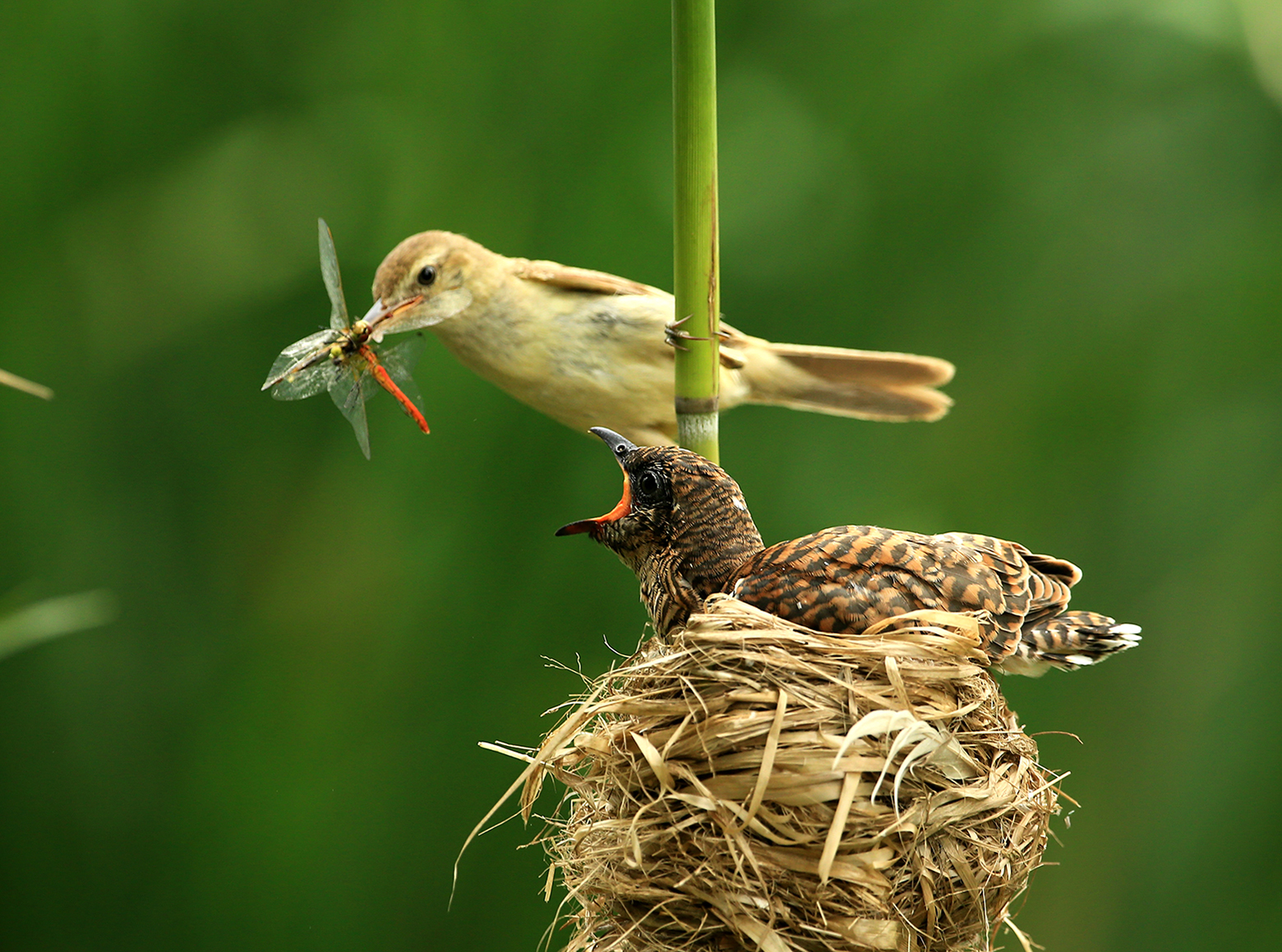 The co-evolutionary consequences of social transmission are not only limited to antagonistic species interactions – exciting new work with ants in Japan suggests that social transmission is important in maintaining mutualisms too.10 Like many ant species, Tetramorium ants rely on their aphid partners to produce honeydew as a food resource. The ants tend the aphids in their nest, and in return, the aphids receive protection from predators. This mutualism can break down, however, if the ants do not recognize the aphids as beneficial. Masayuki Hayashi and his colleagues noticed that if ants were prevented from ever tending the aphids, then they were aggressive towards them during experiments. If the inexperienced ants were allowed to first interact with experienced aphid-tenders, however, then this aggression disappeared. Socially-informed ants tended the aphids as much as experienced ants did. Ants transfer food among one another (through mouth-to-mouth feeding known as trophallaxis), and this is likely to be the source of social information about aphid identity – it is not just transfer of honeydew that primes inexperienced ants, but also the transmission of chemical compounds that might signal aphid identity. Without social transmission, it would be difficult for the mutualism to persist.