The niche construction perspective was originally introduced into evolutionary biology through the pioneering writings of Conrad Waddington and Richard Lewontin. The perspective is encapsulated in the below quote:

The organism influences its own evolution, by being both the object of natural selection and the creator of the conditions of that selection.

From a niche construction standpoint, organisms are viewed as co-directing their own evolution. Through their activities, organisms modify selection acting on themselves and other species that share their environment. Evolution thus entails networks of causation and feedback in which previously selected organisms drive environmental changes, and organism-modified environments subsequently select for changes in organisms (Odling-Smee 1988). Here, environmental modification by organisms (“niche constructionThe process whereby organisms, through their metabolism, their activities, and their choices, modify their own and/or each other’s niches.”), and its legacy over time (“ecological inheritanceThe inheritance, via an external environment, of one or more natural selection pressures previously modified by niche-constructing organisms.”), are explicitly recognized to be evolutionary processes: that is, they cause evolutionary change by acting as sources of modified selection, as well as of modified phenotypes.

However, niche construction is not restricted to the biological adaptations of organisms, but also stems from their developmental plasticity, their by-products, and their acquired characters. Organisms are viewed as active agents that impose order on the conditions of their existence, and direction on their development and evolution.

The niche construction perspective is intellectually aligned with other movements within evolutionary biology, including ‘developmental systems theory’ (Oyama et al., 2001), the active role of behavior in evolution (Bateson, 1988; Duckworth 2009), an emphasis on developmental plasticity (West-Eberhard, 2003), and calls for an extended evolutionary synthesisA new evolutionary framework emphasizing that knowledge of how organisms develop, grow, and interact with environments helps to account for adaptation and the diversity of life. (Laland et al, 2015).

Lewontin RC. 2000. The Triple Helix: Gene, Organism, and Environment. Cambridge: Harvard University Press Another readable introduction to the niche-construction perspective by the pioneer of this way of thinking. 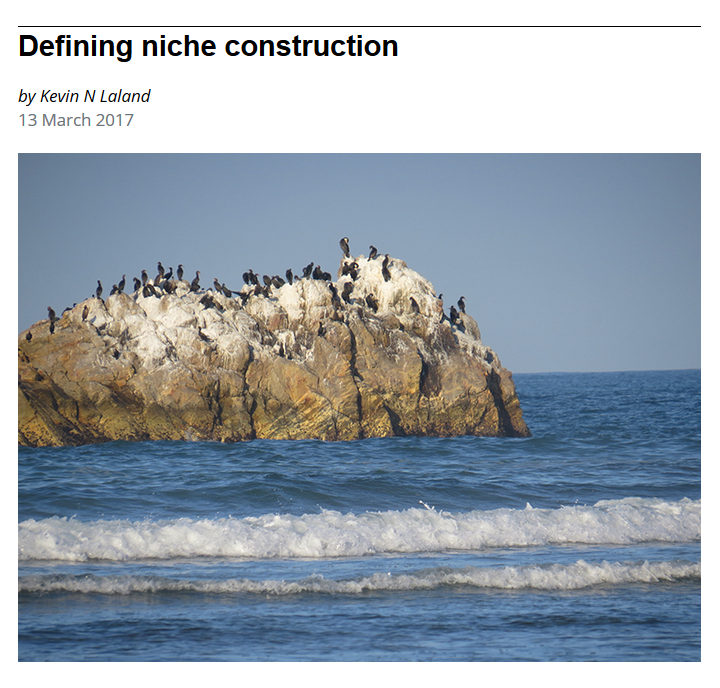 In this blog post, Kevin Laland explains why niche construction is defined broadly.

Criterion 2) The organism-mediated environmental modifications must influence selection pressures on a recipient of niche construction.

Criterion 3) There must be a detectable evolutionary response in a recipient of niche construction that is caused by the environmental modification of the niche constructor.

Organisms modify the selection that they experience both through physically changing their environments (‘perturbational niche construction’Organisms physically change one or more components of their external environments.) and habitat choice (‘relocational niche construction’Organisms actively move in space, as well as choose or bias the direction, the distance in space through which they travel, and the time when they travel, thereby modifying natural selection.). 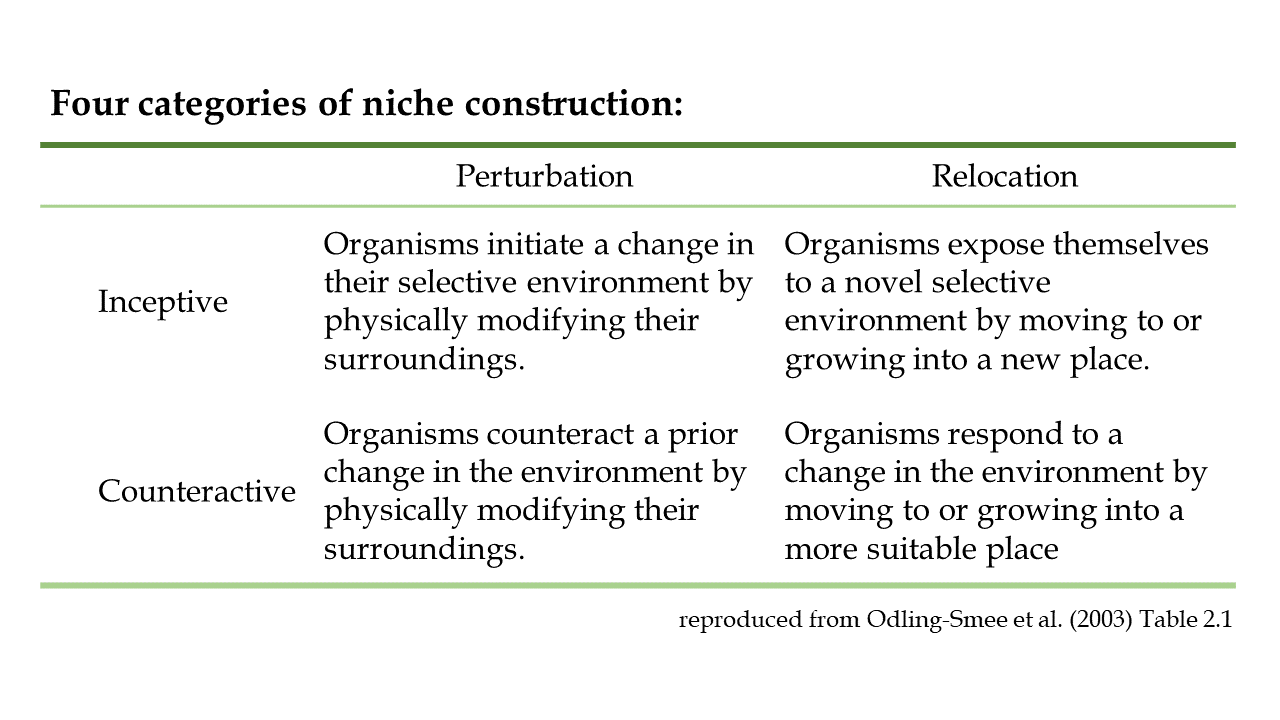 If an environmental factor is already changing, or has changed, organisms may oppose or cancel out that change, a process labelled counteractive niche construction. For instance, many wasps and bees will engage in temperature regulation of their nests, heating it up through muscular activity in the cold, and placing droplets of water on the surface, allowing it to cool through evaporation, in the heat. Counteractive niche construction is therefore conservative or stabilizing, and it functions to buffer organisms from shifts in factors away from states to which they have been adapted.

Organisms can also make adjustments that change their experience of the environment, without changing the environment itself (experiential niche construction) (Sultan 2015, Chiu 2019). For instance, penguins huddle to keep warm, whilst plants shift the orientation of their leaves to maximize input from the sun .

The history of niche construction research

The scientific study of niche construction dates back to the early writings on ecological succession of William King in the 17th century. There were important 19th century contributions by Charles Darwin (1851) on corals and earthworms (1881), Lewis Henry Morgan (1868) on the beaver, Nathaniel Shaler’s (1892) analyses of how animals affect soils, and Frederic Clements’ (1916) classic work on plant ecological succession.

Schrödinger pointed out that living organisms are far-from-equilibrium systems relative to their physical surroundings.  To preserve their out-of-equilibrium status, while creating order (structure, organization) in their bodies and their immediate surrounds, Schrödinger emphasized that organisms must actively do work on their environment. In other words, living organisms can only survive by constantly engaging in niche construction. This activity cannot be random: organisms must change environments in systematic, directional ways.

The developmental biologist Conrad Waddington FRS was also an early advocate of the idea. Waddington (1957, 1959) believed that evolutionary theory was incomplete, and suggested that one factor whose significance had not been fully appreciated was niche construction (which he called the exploitive systemThe self-determination by an organism of the nature and intensity of the selective pressures that are exerted on it., the green section in figure below).

Animals … are usually surrounded by a much wider range of environmental conditions than they are willing to inhabit. They live in a highly heterogeneous ‘ambience’, from which they themselves select the particular habitat in which their life will be passed. Thus the animal by its behaviour contributes in a most important way to determining the nature and intensity of the selective pressures which will be exerted on it.

His writings stressed how genes, organisms and environments are in reciprocal interaction with each other in such a way that each is both cause and effect (Lewontin, 1983, p281):

According to Lewontin, this construction process has a number of features:

(1) Organisms determine what is relevant. While stones are part of a thrush’s environment, tree bark is part of a woodpecker’s, and the underside of leaves part of a warbler’s. It is the life activities of these birds that determine which parts of the world, physically accessible to all of them, are actually parts of their environments….

(2) Organisms alter the external world as it becomes part of their environments. All organisms consume resources by taking up minerals, by eating. But they may also create the resources for their own consumption, as when ants make fungus farms, or trees spread out leaves to catch sunlight….

(3) Organisms transduce the physical signals of the external world. Changes in external temperature are not perceived by my liver as thermal changes but as alterations in the concentrations of certain hormones and ions….

(4) Organisms create a statistical pattern of environment different from the pattern in the external world. Organisms, by their life activities, can damp oscillations, for example in food supply by storage, or in temperature by changing their orientation or moving. They can, on the contrary, magnify differences by using small changes in abundance of food types as a cue for switching search images. They can also integrate and differentiate. Plants may flower only when a sufficient number of days above a certain temperature have been accumulated.

However, while Lewontin’s articles focused attention on niche construction, they were generally interpreted as a critique of adaptationism, and it was not apparent to most biologists how these ideas could be translated into practical science.

John Odling-Smee and beyond

Oxford biologist John Odling-Smee (1988) was the first person to coin the term niche construction, and the first to make the argument explicit that niche construction should be recognized as an evolutionary process. Odling-Smee (1988) also introduced the concept of ecological inheritanceThe inheritance, via an external environment, of one or more natural selection pressures previously modified by niche-constructing organisms..

Together with Kevin Laland and Marcus Feldman, Odling-Smee began the first systematic investigation of niche construction. The team documented and categorized the extent of niche construction in living organisms, devised methods by which its ecological and evolutionary consequences could be investigated, and derived dedicated theory to explore these questions (Odling-Smee et al. 1996, 2003; Laland et al. 1996, 1999).

Niche construction theory gained prominence amongst evolutionary biologists and ecologists with Odling-Smee et al.’s influential monograph Niche Construction: The Neglected Process in Evolution (2003). The study of ecosystem engineeringThe modification by organisms of physical surroundings (e.g., light environment, physical habitat structure) so as to modulate the availability of resources or energy fluxes in an ecosystem (a concept that overlaps with niche construction) took off in the mid 1990s (Jones et al. 1994, 1997Jones & Lawton 1995) within ecosystem ecology, adding to the momentum to investigate the effects of organisms on environments.

Schrödinger E. 1944/2012. What is Life? With Mind and Matter and Autobiographical Sketches. Cambridge University Press: Cambridge UK. This accessible essay illustrates how Schrodinger was a pioneer of the niche constructive perspective.

Waddington CH. 1959 Evolutionary systems – animal and human. Nature 183:1634-1638. Waddington was ahead of his time in recognizing the importance of niche construction (which he called the ‘exploitative system’) for the evolutionary process.

Odling-Smee, F.J. Niche constructing phenotypes. In. H.C. Plotkin, ed., The Role of Behavior in Evolution, 73-132. Cambridge: MIT Press. Here Odling-Smee first makes the argument that niche construction should be recognized as an evolutionary process, and introduces the concept of ‘ecological inheritance.’ 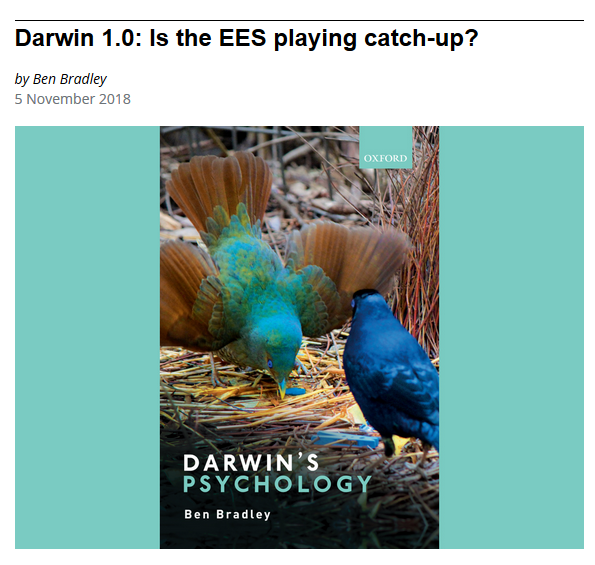 Niche construction overlaps with several other concepts deployed within ecology and evolution (Odling-Smee et al, 2003). Three of these are particularly noteworthy: ecosystem engineering, eco-evolutionary dynamics, and the extended phenotype.

In recent times, the two fields have been regarded as complementary and mutually reinforcing, with much cross-citation, and joint publications (e.g. Odling-Smee et al, 2013; Matthews et al, 2014).

Matthews et al (2014) emphasize that while some of the potential mechanisms of niche construction are well-studied, others are not, and that niche construction has value in drawing attention to these gaps. Several research areas in ecology and evolution could be expanded to test for new examples of evolution by niche construction by measuring evolutionary responses of organism-mediated environmental modifications.

Extended phenotypes also exclude aspects of niche construction that depend on acquired knowledge, for instance, human cultural processes. This is an important limitation for scholars of anthropogenic change, since very little human niche construction can accurately be characterized as a biological adaptation.

Finally, the environmental modifications produced by niche-constructing organisms, such as beaver’s dams or termite mounds, may persist through repetition and reconstruction for longer than the individual constructors, and may continue to modulate the impact of these effects on subsequent generations of the same or other populations, a legacy described as an ‘ecological inheritance’.

Further distinctions between niche construction and the extended phenotype are discussed here.

Niche construction theory emphasizes how niche construction can scale up across individuals in populations and over time to generate stable and directional modification of environmental components. As a result, niche construction generates consistent and sustained forms of natural selection, and thereby imposes biases on evolution (Laland et al, 2015).

Schrödinger E. 1944/2012. What is Life? With Mind and Matter and Autobiographical Sketches. Cambridge University Press: Cambridge UK. This accessible essay illustrates how Schrodinger was a pioneer of the niche constructive perspective.

Waddington CH. 1959 Evolutionary systems – animal and human. Nature 183:1634-1638. Waddington was ahead of his time in recognizing the importance of niche construction (which he called the ‘exploitative system’) for the evolutionary process.

Odling-Smee, F.J. Niche constructing phenotypes. In. H.C. Plotkin, ed., The Role of Behavior in Evolution, 73-132. Cambridge: MIT Press. Here Odling-Smee first makes the argument that niche construction should be recognized as an evolutionary process, and introduces the concept of ‘ecological inheritance.’