Getting into the weeds: Individual plasticity and adaptive variation

Starting with Watson and Crick, genes have been defined as stretches of the DNA molecule that contain developmental instructions for particular traits; evolutionary biologists consider genotypic variations to be the source of the differences among individual organisms that result in natural selection. Yet this elegantly simple view of adaptive evolution overlooks the fact that environmental conditions also play a role in development. After decades of focusing on genes as self-contained developmental instructions, the newly emergent discipline of ecological development (eco-devo)1, 2  represents a return to an earlier, more holistic perspective that promises to change our understanding of adaptive variation and evolution.

At the turn of the twentieth century, both botanists and zoologists viewed individual development as the expression of an organism’s inherited genotype in the context of its particular environmental surroundings. To these scientists, it was self-evident that variation in factors such as temperature and food availability (for animals) or light and nutrients (for plants) would influence the individual organism’s development and resulting phenotype (physical and behavioral traits). Contemporary molecular work has shown that this earlier intuition was correct: DNA is differently expressed depending on environmental conditions. For evolutionary biologists, who aim to characterize the fitness differences that lead to natural selection, this central insight means that we need to study the effects of different genotypes in the context of real, variable environments. In this light, individual organisms become unexpectedly active participants in their own adaptation.

I can illustrate this shift in approach using a common herbaceous plant, Waterpepper Smartweed, one of several widespread annual species in the genus Polygonum that we study in my lab. These plants are not particularly remarkable or ecologically important, but they provide a very good model system for studying how genotypes may develop differently in alternative environments, a property known as phenotypic plasticity. Studying plasticity involves testing replicate individuals of specific genotypes to see how a given genotype may develop differently in contrasting conditions. The Polygonum species we work with are suitable for this kind of eco-devo experiment for a number of reasons. Genetic individuals collected from local populations can be cloned simply by making cuttings. Even better, since plants can self-fertilize, we can easily generate inbred lines that provide hundreds of genetically uniform seeds. The short annual life-cycle allows us to directly measure lifetime reproduction (i.e., Darwinian fitness) along with developmental and physiological traits. Studying plants from real populations provides insight to the developmental repertoires of naturally evolved genotypes. 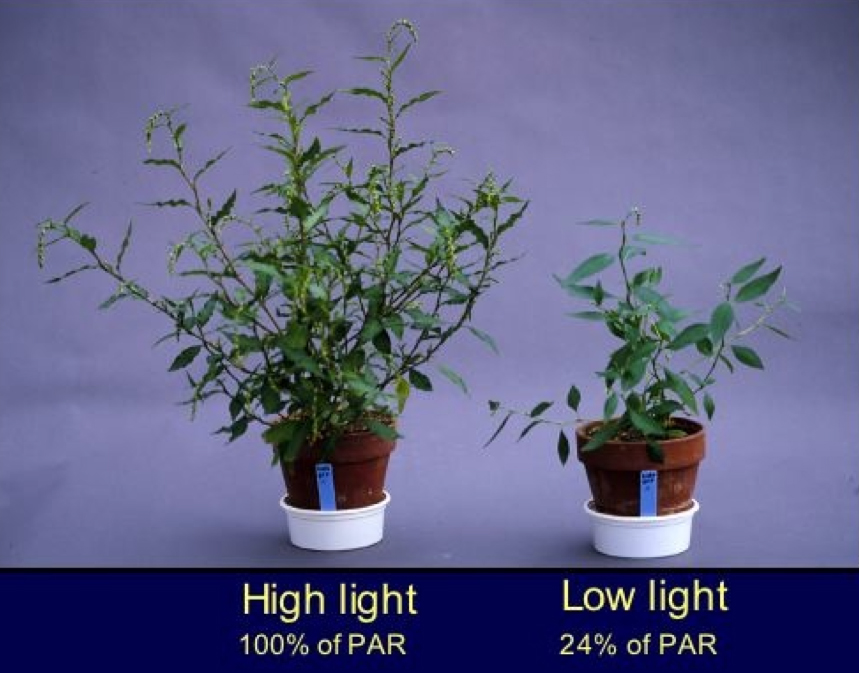 For instance, this photo shows two genetically identical Polygonum hydropiper plants that were grown in different glasshouse environments: the plant on the left received full summer sun, and that on the right instead received only 24% of incident sunlight, limiting its potential photosynthetic activity. Not surprisingly, the low-light plant produced less total biomass and fewer seeds than the full-sun plant. During the mid- twentieth century when evolutionary theory was initially framed, environmental influences on development were assumed to consist of such straightforward effects. Evolutionary biologists reasoned that low versus high resource levels would affect all genotypes similarly and thus have no impact on the outcome of natural selection, apart from adding some environmental noise around the genetic ‘signal’.

But a closer look at these two plants reveals more subtle, functionally adaptive phenotypic differences. The leaves of the low-light plant are much larger and broader than those of the full-sun plant, and the plant as a whole has a higher proportion of its tissue invested in leaves. As a result of these plastic adjustments, for its size the light-deprived plant has a far greater leaf surface area for intercepting light. Similarly, genetically identical Polygonum plants grown in dry versus moist soil allocate more biomass to root tissue, and make longer, thinner roots that maximize the surface area for water uptake. Although Polygonum plants are unusually convenient experimentally, this kind of developmental plasticity is typical of herbaceous plants (indeed, the other three species we have studied all express greater plastic change in response to shade than the one shown in the photo).

Animals in resource-poor conditions may also express both negative effects of poor environments and adaptive plastic responses that enhance resource availability. When the local food supply is limited to fibrous, low-quality foods, many small mammals develop larger gut capacity and intestinal area that maximize food processing and nutrient absorption3, and certain grasshoppers develop larger and more muscular mandibles as well as a larger gut4. Cichlid fish develop different cranial features depending on locally abundant food items that require different jaw functionalities. Similarly, fish reared in oxygen-poor water dramatically remodel their gills so as to hugely increase respiratory surface area and maintain oxygen supply5. In fact, organisms of all kinds express some degree of plasticity, whether developmental, physiological or behavioral. These various types of developmental response allow a single genotype to produce functionally diverse phenotypes. This picture of adaptive flexibility is further complicated by the fact that environmental response patterns differ from one genotype to another (genotype by environment interaction).

Surprisingly, individual plasticity can also be trans-generational rather than expressed within the organism’s lifetime. A number of recent studies show that environmental conditions encountered by parent individuals can strongly influence the development of their offspring. As with immediate plasticity, in some cases these environmentally-induced effects include specifically adaptive changes. In Polygonum persicaria, when parent plants are drought-stressed, they produce seedlings with faster-growing, more extensive root systems that survive better in dry soil6. Our current experiments with this species show that shading parent plants results in enhanced fitness of seedling progeny that encounter moderate or deep shade from neighboring plants.

Recent studies provide numerous examples of such inherited, environmentally-induced adaptations to stresses or threats encountered by the previous generation. When parental Mimulus plants suffer simulated leaf herbivory, they produce offspring with denser defensive leaf hairs. In the tiny but well-studied aquatic crustacean Daphnia, mothers exposed to the presence of a predator produce young that sport a forbidding defensive helmet. Exciting work testing the expected disruptive effects of climate change on fish development has shown that if parents in certain species are exposed to elevated levels of either water temperature or carbon dioxide, their offspring develop normally7,8.  Such transgenerational effects of the environment make clear that inherited developmental information includes more than genes alone. Recent discoveries about environmentally-induced epigenetic modifications (such as DNA methylation and histone modifications) provide solidly documented mechanisms for these phenomena and reveal that, in some cases, they may persist for multiple generations. As with immediate plasticity, too, genetic differences influence the precise impact and dynamics of these fascinating transgenerational effects.

Eco-devo experiments have revealed an unexpectedly complicated picture of adaptive variation. The differences among individual organisms are not scripted in their DNA, but take shape via the interactions between their genotypes, their immediate environments, and the inherited effects of their parents (and possibly grandparents’) circumstances9. As a result, natural selection acts not on consistent genotypic fitness differences, but on the joint developmental outcomes of genotype and these multi-layered environments, as expressed in habitats that vary spatially and over time. This complex picture means that selective evolution can no longer be viewed as a simple genetic sorting process. To arrive at a richer understanding of adaptation, we will need to explore how development and inheritance work in the context of multi-generational environments, and how the plastic response systems of plants and animals in turn evolve.