Last week I had the privilege of attending the workshop The Conceptual Legacy of “On Growth and Form” held in St Andrews UK, a (late) celebration of the centenary of publication of D’Arcy Thompson’s classic book (1917/1942).1 The meeting, organized by philosophers of biology Alan Love and Sahotra Sarkar, comprised an interesting mix of developmental biologists and philosophers.  Like most evolutionary biologists, I had been vaguely aware that Thompson was an early pioneer of the use of mathematical approaches in biology. I also knew that his views were regarded as heretical by the establishment. However, prior to the workshop I had not read “On Growth and Form”, which was something of an embarrassment as D’Arcy is a famous alumnus of my university, St Andrews.

The book is no easy read, the second edition being some 1116 pages, and liberally sprinkled with quotations in Latin, Greek and modern European languages. Fortunately, there is a very good abridged version available, edited by John Tyler Bonner (1961) and with a forward by Stephen Jay Gould.  Prompted by the workshop, I finally got round to reading it and found myself surprised by how relevant it seemed to contemporary evolutionary debates. There is, of course, always a danger when reading historical texts that we read too much into them. However, I couldn’t help but wonder whether Thompson might have been an early advocate of phenotypic plasticity and developmental bias playing evolutionary roles.

D’Arcy Thompson is famous for arguing that physical forces explain many of the characteristics of organisms. He believed that the morphology of living creatures provided a direct indication of the forces they experienced. To justify this claim, he drew attention to striking parallels between the shape of abiotic entities, such as soap bubbles, splashes, and falling drops of liquid, and the characteristics of living creatures. For instance, some vertebrate skeletons bear a remarkable structural resemblance to bridges, which reflect similarities in the forces experienced. The main focus of the workshop was on how D’Arcy’s writings had influenced the study and understanding of morphogenesis. The mainstream view today is that development is specified by genes, which lay down patterns and thereby specify cell differentiation and morphogenesis necessary for the production of tissues. Consistent with Thompson’s writings, several of the speakers presented an alternative causal pattern in which physical and mechanical forces acting on cells played important roles in the formation of tissue features such as follicles, stripes and folding patterns, often themselves in the process creating targets in tissues for gene expression. However, it was the evolutionary implications of D’Arcy’s work that fascinated me most.

The parallels that Thompson noted between the shape of biotic and abiotic phenomena are, it would seem, reasonably widely accepted. However, contention still surrounds how they should be interpreted. One reading of D’Arcy’s data, which I suspect is how many evolutionists would reason, is that the correspondence between the expected morphology of organisms predicted on the basis of knowledge of physical forces and that observed in nature is an illustration of the power of selection to optimize. On this viewpoint, consideration of physical forces is valuable because it helps to make biology a more predictive science: in principle, we could predict a priori some of the forms that we see in nature with knowledge of physics, and that is the global optimum to which selection should take organismal form. Likewise, departures from this optimum could be viewed as a manifestation of physical constraints. However, comforting though it may be, that is not the only way to interpret D’Arcy’s findings, nor is it (according to Thompson authorities) the reading he intended. 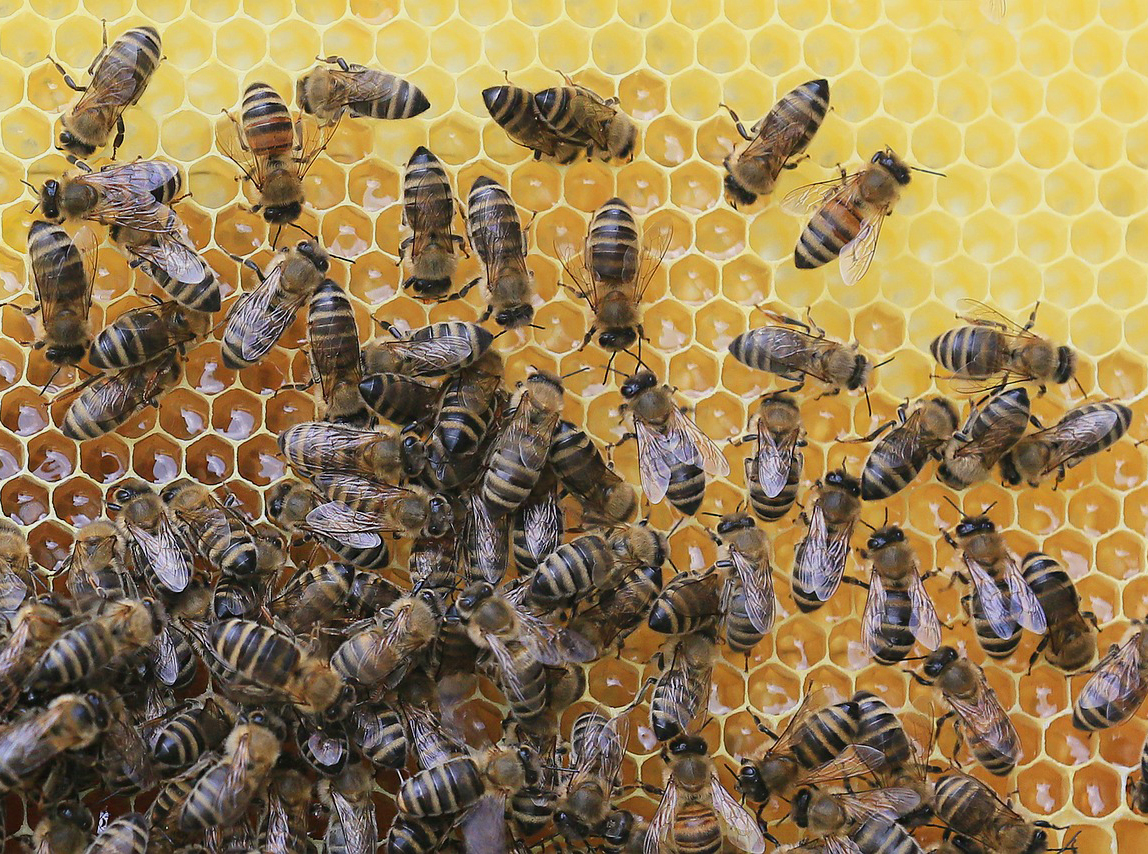 The reason that Thompson’s findings generated controversy is that they also lend themselves to a structuralist interpretation (Bonner, 1961). On this view, D’Arcy is suggesting that the correspondence between the expected morphology of organisms predicted on the basis of knowledge of physical forces and that observed in nature suggests that selective accounts are unnecessary. For instance, the fact that honeybee comb cells are hexagonal in cross-section might not require an explanation in terms of natural selection fashioning bee cognition in a way that allowed them to recognize and manufacture a hexagonal shape, which Darwin (1859) had characterized as ‘the most wonderful of known instincts’. For Thompson, honeycomb shape is not an adaptation, but rather the ‘automatic play of physical forces’, such as the ‘symmetrical tensions of the semi fluid films’. He notes that the bees themselves only produce a crude spherical cell, and that the hexagon shape emerges through pressure. However, this reading of Thompson, which authorities believe is closer to his intent, implies that selection would not explain the origin of many characters, and hence in such instances there would be no adaptation through gradual accumulation of small refinements in form.

A further ramification is that similarity of forms across species would be indicative of similar immediate environmental effects of physical forces, rather than shared ancestry and adaptive responses. For instance, Thompson expresses skepticism that any one gastropod shell is “better” than another, and notes that the eggs of sea urchins, reared in lime-free water, develop, “in apparent health and comfort”, into larvae that lack the usual skeleton. The implication is that much morphological variation is neutral rather than adaptive, and that Thompson was concerned Darwinians were too ready to see adaptation in every character.

However, here I was struck by the possibility of another way of interpreting Thompson – as a lobby to recognize an important role for developmental plasticity. Perhaps the correspondence between the expected morphology of organisms predicted on the basis of knowledge of physical forces and that observed in nature meant that selection had favored the production or retention of organisms’ responsiveness to physical forces. This may be relevant to within species variation, where some patterns of developmental plasticity could potentially be accounted for by invoking selection on reaction norms, and where knowledge of physical forces might be helpful in part for explaining the shapes of reaction norms.

Aspects of Thompson’s writing do indeed support this interpretation. Thompson was neither a reductionist, nor opposed to explanations in terms of natural selection. He states: “One does not come by studying living things for a lifetime to suppose that physics and chemistry can account for them all”. With respect to the vertebrate skeleton, D’Arcy writes: “It would, I dare say, be an exaggeration to see in every bone nothing more than a resultant of immediate and direct physical or mechanical conditions; for to do so would be to deny the existence, in this connection, of a principle of heredity….But I maintain that it is no less an exaggeration if we tend to neglect these direct physical and mechanical modes of causation altogether, and to see in the characters of a bone merely the results of variation and of heredity” (p265). He is clearly concerned that mechanical factors are being ignored, and that this neglect would undermine attempts to infer phylogenetic relationships from morphology (what he calls “the problem of phylogeny”). Here D’Arcy appears to me to have a plasticity orientated perspective in which “skeletal form, as brought about by growth, is to a very large extent determined by mechanical considerations”, which in turn reflect the organism’s activities. I couldn’t help but be reminded of Matt Wund and colleagues’ beautiful demonstration of how ancestral marine sticklebacks reared on typical benthic and limnetic diets develop morphologies strikingly similar to derived benthic and limnetic species.

Is it possible that, translated into contemporary parlance, D’Arcy Thompson was making a plasticity first argument, along the lines of West-Eberhard (2003)? His discussion of the medusa provides another suggestive example. After describing Hatschek’s experiments with drops of liquid gelatin, and noting their resemblance to medusoids, he writes “an extremely curious result of Hatschek’s experiment is to show how sensitive these vorticoid drops are to physical conditions”, the implication being that variation in physical conditions could equally explain variation in organismal form. Earlier in a letter he writes: “the form of the Medusa is a figure of equilibrium under certain peculiar conditions, and that therefore it is not to be explained as something attained, by way of “adaptation”, and by means of slow gradations of evolutionary development” (Thompson, 1918).2 Doesn’t this imply that selection does not explain the origin of this character, yet leave open the possibility that it might play a role in its retention or stabilization?

The most famous chapter in On Growth and Form is that dedicated to his ‘theory of transformations’, which has inspired many biologists interested in evolution and development. Thompson showed that if you sketch the outline of an animal or plant on a Cartesian grid, and then subject the grid to a simple mathematical transformation, such as stretching or compressing it in one or more dimensions, the transformed outline will often resemble another, closely related, organism. The implication of this finding is that small differences in rates or coordinated patterns of growth could underlie inter-species differences in morphology. Evolutionary developmental biologists have long speculated that the origins of transformations might lie in changes in the rates, durations and directions of cell proliferation, perhaps mediated by modest changes in transcription factors.

Some of the studies coming out of evolutionary developmental biology seem to back this up. For instance, studies with rodents have established that the size and number of teeth can be accurately predicted using a mathematical model based on knowledge of the mechanisms of tooth production in mice, and that this model could be used to predict the relative sizes of teeth in a sample of 29 other rodent species. Herbivores tended to have more equal sized teeth and carnivores less equal, but all species were positioned in the same dimension of morphological space. It would appear that rather than being free to make any shape or number of teeth, natural selection is pushing species along a highly specific pathway created by the mechanisms of development. Selection is generating transformations in form along this dimension, but other, more difficult, types of transformation are much rarer.

There can be no question that a hundred years after it was first published On Growth and Form remains a provocative and inspiring book. Clearly some of D’Arcy’s messages remain highly relevant. In at least some instances, to speak of “genetic control of form” may be misleading, as the form of a character may arise without an overarching internal directing influence as a response of organic matter to physical forces to which it is exposed. Likewise, adaptive explanations for variation in form may be unnecessary. I could see no evidence that Thompson was anti-Darwinian or a Lamarckian sympathizer, as he is sometimes portrayed (although he does express skepticism over whether evolutionary change necessarily results from “endless small continuous variations”). The most exciting notion that I took from Thompson’s great tome is that he might well have been a pioneer of ideas central to today’s debates about the structure of evolutionary theory: that is, an advocate of central roles for developmental plasticity and bias in evolution. If these interpretations of Thompson’s writing are correct, he truly was a prescient thinker.